Wurzen is a large district town in the northeast of the Leipzig district in Saxony . The city has been the cathedral city ​​for 900 years and thus at the same time the center and namesake of the Wurzener Land . As the birthplace of the poet Joachim Ringelnatz the city leads unofficially nicknamed Ringelnatz city .

Wurzen is located on the eastern high bank of the Mulde , about 30 kilometers east of Leipzig , on the oldest German long - distance railway line Leipzig – Dresden and on federal highway 6 . The B 107 runs west of the city. In the southeast the urban area borders on the Wermsdorfer Forest . The Mühlbach that rises there flows through the urban area. The A 14 south of the city can be reached via the Grimma junction (about 20 kilometers).

On the Wurzener Stadtflur (Crostigall), recent archaeological excavations have demonstrated a settlement continuity of around 6000 years. The region was inhabited by Germanic people until the 6th century. The oldest (?) Settlement cells of today's city are - like the place name - of Slavic origin. Wurzen is mentioned for the first time in 961 in a document from Otto I as Vurcine and Civitas . The castle and the market settlement drew their importance from their location at the junction of the Via Regia over the Mulde river and its intersection with an old salt road from Halle to Prague . Wurzen belonged temporarily to the diocese of Merseburg and after 995 came to the diocese of Meißen . Bishop Herwig founded the Wurzen collegiate monastery in 1114 , which became Protestant in the 16th century and still exists ( cathedral chapter ). A market settlement was established east of the older castle settlement around 1150 by the bishops of Meissen . The expansion of the country , especially through the settlement of farmers from the western territories of the empire (" Kührener settlement contract" 1154 for 15 Flemish farming families) and the establishment of their own secular territorial rule ( Wurzener Land ) made the newly founded market settlement as a central location grow rapidly.

The development of the city reached a high point in the 15th and 16th centuries, when the bishops of Meissen temporarily resided here and undertook significant building activities (castle, cathedral extension, St. Wenceslai church). After the division of the Wettin lands (1485), the patronage over Wurzen and Wurzener Land was jointly exercised by the Ernestines and Albertines . Both lines were ultimately aimed at secularization of the episcopal territory, which u. a. 1542 led to the so-called " Wurzener Feud " ("Fladenkrieg"). Wurzen and the so-called "Wurzener Land", which surrounds the city mainly east of the Mulde, did not belong to the Wettin lands until 1581, but were secular property of the bishops of Meissen, who resided in Wurzen several times, since 1487 more and more often and longer. Even after the "surrender" and "resignation" of the last bishop Johann von Haugwitz in 1581, the area was administered until 1818 by a specially appointed Saxon monastery government. Only then did the Wurzener Land become part of Saxony as an administrative district in the true sense of the word.

Oldest railway bridge in operation in Germany from 1838 near Kornhain

In 1581 Wurzen came to Albertine Saxony , which in the meantime, as a result of the Schmalkaldic War, had acquired the electoral dignity in 1547 and which now had Wurzen and the monastery area ( Wurzener Land ) administered by a specially appointed monastery government (until 1818).

In Wurzen 1570-1659 persecutions of witches were carried out: five people were involved in witch trials, one man was whacked with “fruit of the body” on charges of sorcery in 1570, one woman died in custody. The economic and demographic decline of the city, caused by the plague epidemics (especially in 1607), city fires and the consequences of war, took place in the 17th and 18th centuries . During the Thirty Years' War , the town was plundered by the Swedes in 1637 ("Wurtznian Creutz and Torture Week") and almost completely burned down. The Northern War , but especially the Seven Years' War and the Napoleonic Wars , let the city wither away. Only after the downsizing of Saxony after the Congress of Vienna (1815) and the construction of road bridges over the Mulde and Flussaue (1830/1832) did a remarkable upswing set in again.

On July 31, 1838 Wurzen was connected to the German railway network ( Leipzig-Dresden Railway ). The first railway bridge in Germany was built over the Mulde , the bridge over the B 6 is today the oldest German railway bridge in operation. Then it developed rapidly as an industrial city (especially food and textile industry, metal processing). The population quadrupled between 1850 and 1914. This development also continued in the 20th century until the 1970s. After German reunification, there was another strong economic and demographic decline, the number of inhabitants fell to a threatening extent and the average age of the inhabitants rose.

As a result of the stormy industrialization in the second half of the 19th century, the workers' movement developed early in Wurzen . For a time in the 1880s, Julius Künzel was the only social democratic city councilor in Saxony. In 1903 a subdistrict of the SPD was founded in Wurzen . During the November Revolution, one of the first workers and soldiers' councils in what was then Saxony acted in Wurzen . Albert Kuntz worked as a prominent KPD member in Wurzen until 1923 . a. in the city council. In 1926 a coalition of the SPD and KPD succeeded in establishing a majority in the city council and electing Georg Boock for the first time as a social-democratic mayor.

Wurzen, which previously belonged to the administrative authority of Grimma , became a district-free town in 1924 , one of the smallest in Germany, and became part of the Grimma district in 1946 and the Wurzen district in 1952 until its dissolution in 1994.

From 1935 to 1945 the city housed a military district command and during the Second World War several anti-aircraft units. From October 1943 to April 1945, Wurzen experienced several American air raids , with over 40 fatalities. The most severe took place on October 7, 1944, when 13 “Flying Fortresses” B-17 dropped around 85 high-explosive explosive bombs on Wurzen, which were actually intended for the Brüx hydrogenation works in northern Bohemia.

From July 1939 to May 1945 Armin Graebert (1898–1947) was Lord Mayor of the city; On April 24, 1945, together with members of the SPD, KPD and the pastors of the Protestant and Catholic churches, he achieved the surrender of the city to Major Victor G. Conley of the 273rd US Infantry Regiment and thus saved it from destruction.

The town's high school, named after Magnus Gottfried Lichtwer since 1993, moved to a new building in 1996 northeast of the historic town center.

Wurzen has been one of the pilot projects in the Free State of Saxony for urban redevelopment east since 2002 . Due to the demographic and economic development of the last few decades, for the first time in the history of Saxony it is necessary to organize a planned demolition of urban housing and the sensible reuse of the cleared areas.

The construction of a new Mulde bridge began in 2004 and was handed over in 2007. 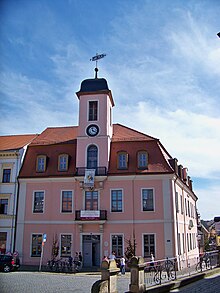 Since the 1990s, the right-wing radical scene has gained more influence in the city than in other comparable municipalities in Eastern Germany, especially among young people. The President of the State Office for the Protection of the Constitution of the Free State of Saxony, Eckehard Dietrich , classified Wurzen in 1996 as “probably the most important center of neo-Nazis in Germany”. The city has been the scene of repeated physical and armed attacks on migrants, journalists and politically more left-wing politicians. Activists count hundreds of incidents over the past 20 years. Attacks in neighboring cities are also sometimes planned and staffed by the Wurzen scene. Sports facilities that offer combat training are also important.

The network for democratic culture, the Wurzen location initiative, the parishes and the city administration are committed to countering the concentration of right-wing violence in Wurzen, which has been spread through the media, and are therefore themselves exposed to right-wing violence. Nonetheless, it represents a persistent problem for the city. The reluctance of the police and the judiciary to perceive and prosecute right-wing crimes is also lamented.

The group of voters “Neues Forum für Wurzen” has connections to the neo-Nazi scene.

In June 2008, Jörg Röglin was elected to succeed Jürgen Schmidt in the second ballot. He was confirmed in office in 2015.

Description : In black, a golden horse jumping to the left , red bridled and with a red saddlecloth, it is carrying a golden rider with a hat and crosier . The person in question is St. Wenceslas

Despite the decline in population and the loss of some important industrial companies (including Wurzener Carpet Factory), Wurzen is an important location with a large number of medium-sized companies, mostly with special products on the world market. Unemployment is currently the lowest in the employment district. An economic focus is the production of pastries and confectionery at a subsidiary of Griesson - de Beukelaer . In addition, a large number of high-performance medium-sized mechanical engineering companies and specialist companies (transport systems, lighting equipment manufacture, felt manufacture) are based in the city.

The hospital is a house of standard care run by the district. With the hospital in Grimma, it belongs to the Muldentalkliniken GmbH.

Wurzen is on the B 6 , the B 107 runs on the left bank of the Mulde through Bennewitz . The A 14 can be reached via the B 107 in the south (connection point Grimma) approx. 15 km away and in the west via the B 6 (connection point Leipzig-Ost) approx. 18 km away. The S3 line of the S-Bahn Mitteldeutschland connects Wurzen with Leipzig city center, the Regional Express connects the city with the main train stations of Dresden and Leipzig. The city is part of the Central German Transport Association and is connected by the Leipzig regional bus with two PlusBus and other regional bus routes.

Municipal gallery on the market

Regular exhibitions take place in the gallery on the market. In 2013, on the occasion of Joachim Ringelnatz's 130th birthday, an exhibition entitled Die Frauen um Ringelnatz was organized . 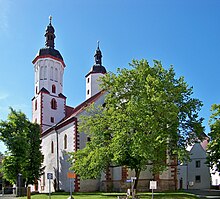 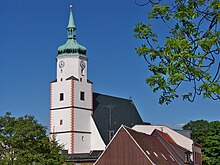 Wurzen is located on the Ecumenical Pilgrimage Route , which was set up in 2003 by the Saxon youth pastor's office. In Wurzener Land, this hiking trail largely follows the old route of the medieval Via Regia . Like no other city in central Germany has Wurzen memories of the medieval Jacob pilgrimage : Jakobsplatz, Jakobgasse and - until the Thirty Years' War keen - Jacob Church, Jakobskirchhof and Jacob Hospital.

In the urban area (Gerhart-Hauptmann-Platz) the Via Regia also crosses a second old transcontinental long-distance route, an old salt road from Halle to Prague . This old road , which runs from north to south, is part of the future transcontinental cultural route Via Salaria ( Lübeck - Trapani / Sicily ). In addition, the Lutherweg leads through the city, the next stops are Schildau in the northeast and Trebsen in the south.

The former Glauchau – Wurzen railway line is used as part of the Mulderadweg as far as Grimma . The paved path is also suitable for inline skiers.

Architectural monuments and places of remembrance 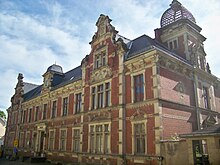 Tower in the city park 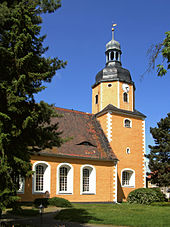 → Main article : List of personalities from the city of Wurzen

In Wurzen there is the Bürgermeister-Schmidt-Platz and the Boockweg - as a thank you and in memory of the former city leaders Julius Theodor Schmidt and Georg Boock .

→ Main article : List of mayors of the city of Wurzen

Cities and municipalities in the district of Leipzig