LCoS is the abbreviation for English Liquid Crystal on Silicon (dt., Liquid crystals [a] silicon [substrate] ") and refers to a technology for display devices similar to a liquid crystal display (LCD). In contrast to this, however, it does not let the light through, but reflects it. 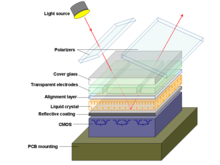 Structure of an LCoS display

LCoS displays are usually very small, with diagonals from 18 mm down to 7 mm, and are therefore part of the so-called “microdisplays”. Despite their small size, LCoS displays can have more than two million pixels and enable an image size that is still above UXGA (1600 × 1200 pixels). In addition, there is a maximum contrast ratio of 1000: 1.

LCoS displays consist of three parts: a silicon film, a thin layer of liquid crystals on top of it and a thin sheet of glass.

The light from a lamp is directed to the LCoS display by means of a special polarizing mirror, where the liquid crystal molecules are aligned by means of electrical voltage so that the light is reflected in the desired brightness. The fill factor of the display is very large (> 90%), which results in a high optical efficiency. In contrast to DMD technology, the light has to be polarized so that it can be modulated by an LCoS display. This means that a higher light output is required. However, LCoS projectors have the potential to become even smaller than their DMD counterparts .

The advantage of LCoS over conventional LCDs is their ability to reflect rather than let light through. This means that the conductor tracks required to control the thin-film transistors can be attached under the reflective layer, and there is no longer a visible grid when the image is displayed (“fly screen effect”). A disadvantage is the lower linearity between the electrical control signal and light variation compared to micromirror actuators . 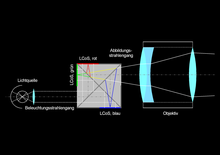 Basic structure of an LCoS projector

As a rule, three LCoS modules integrated in a beam splitter are used for multi-colored projection, each of which is used for a primary color .

LCoS products are available from several manufacturers, at JVC this process is called D-ILA technology , at Sony SXRD . For private consumers, the technology was introduced in Europe in 2005 in digital projectors , which were characterized by high image resolution and image brightness . The first mobile phone with built-in projector from the Chinese manufacturer ShengTai uses this technology.