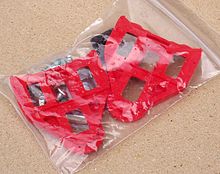 Cleats of the system LOOK Delta

The company was founded in 1951 by Jean Beyl († 2008) in Nevers . Beyl was an avid skier, invented the first form of ski binding in 1948 and acquired other patents in this area. Jean Beyl's father was the cyclist Alfred Beyl , who in 1910 had become a two-time French track cycling champion. LOOK quickly developed into a market leader in this segment of ski technology and is now known as LOOK Ski .

The adoption of ski binding technology for bicycle pedals revolutionized pedals in the 1980s. In 1984 the French company LOOK launched the first clipless pedal and a year later Bernard Hinault won the Tour de France in 1985 with it . That year LOOK presented the first bicycle frame made of carbon fiber reinforced plastic - and Greg LeMond was successful with this frame at the Tour de France in 1986 .

For a long time there was talk of the two common types, hook pedals and look pedals. Today Look is an established supplier of bicycle components and frames. He also supplies the professional team Cofidis, Solutions Crédits . In 2002 LOOK was honored with the INPI trophy for innovation by the French patent office .