This article deals with the filament; for the fruit heads of the plant genus Physalis see lantern flower . 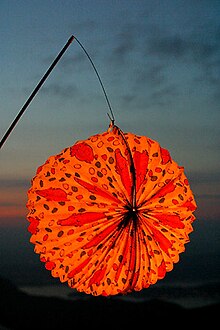 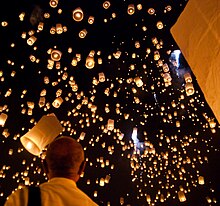 A lantern (Pl .: lanterns ) is a paper lantern made in China for the first time to accommodate an artificial light source .

Inventor of the first lanterns was the Chinese politician and strategist Zhuge Liang ( Chinese 諸葛亮/诸葛亮 , IPA (high Chinese) d̥ʐ̥u5 ɡ̊ɤ214 li̯ɑŋ51 , * 181, † 234), first name Kungming ( Chinese 孔明 Kǒngmíng ), for the three kingdoms period in China . He found himself in an awkward position during one of his military operations. He was surrounded and enclosed by enemies and saw no way of informing his allies of his exact location until he came up with the idea of ​​building lanterns out of bamboo poles and thin paper.

The static buoyancy is generated by its own fire source. This heats the air in the lantern, making its total weight less than the weight of the displaced air. In this first lantern, the source of fire consisted of cloth soaked in petroleum , which was lit. The air warmed and expanded so that they could rise and travel great distances. When the fabric was burned, they sank back to the floor. Zhuge Liang wrote his exact location on the paper lanterns and hoped that they would reach their destination. He used the oracle book I Ching , which has been known for thousands of years, to help him determine the moment of a favorable wind direction for the start of the lanterns. The lanterns made it and he was saved. Since then he has been considered a hero in China and went down in history with his nickname "Kongming" (the open and bright lantern). The hot air balloon is still operated according to this principle today .

In the old tradition in China, lanterns on the house serve not only to have a decorative function but also to convey messages. They provide information about birth, death, social status and impending dangers. In ancient China, the location and size of the lantern testify to its social position. Red lanterns describe happy events, blue describes diminishing energy and white means death. So if a white lantern is hanging in front of a house, it can be assumed that someone died here. A blue lantern could tell of illness and a red one of a wedding or a birth. During the Cultural Revolution in 1966–1976, lanterns were banned.

The first lanterns were made of bamboo poles and thin paper. They were closed at the top and open at the bottom. A piece of cloth soaked in petroleum was attached to a small construction , which was set on fire. Today they usually consist of a frame made of thin metal and are covered with paper. The lighting consists of a candle or a battery-operated lamp.

The subdued light and the mostly imaginative shapes make lanterns so attractive. Lanterns are often used at festivities outside the home. On dark summer evenings and during the dark season of the year, they are carried around the area as mood-generating luminaries in connection with parades in which mainly children take part (e.g. Martinssingen on Martinstag ). The term " lantern " is also used for this. The weatherproof variant, on the other hand, can remain in the garden all year round and serves as garden or decorative lighting. Even today in China on the night of the Moon Festival, Kong Ming lanterns are raised into the sky with good wishes.

In addition, lanterns are often used as a light source for films, as their completely diffuse light is perceived by the audience as the basic brightness and the position of the light source cannot be perceived.