Leibniz Institute for the German Language 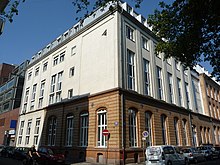 The institute in R5

Location within the Mannheim squares 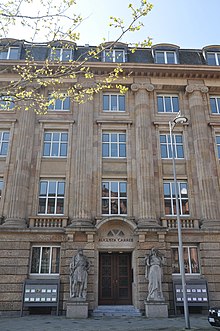 Second location of the IDS in Augusta-Carrée in Mannheim.

The Leibniz Institute for the German Language (IDS) was founded in Mannheim in 1964 and has been located there ever since. It is the central scientific institution for the documentation and research of the German language in the present and recent history, jointly supported by the federal government and all federal states . Together with over 90 other non-university research institutes and service facilities, it belongs to the Leibniz Association .

The IDS has existed since 1964. In 1992, the move to the building in R5 took place, where the premises are still located today. In addition, 22 new scientists from the new federal states were taken on by the Central Institute for Linguistics this year.

The second location has existed in Augusta-Carrée in the Augustaanlage since 2016.

The work of the IDS is divided into the organizational unit Central Research, the four departments of grammar, lexis, pragmatics and digital linguistics as well as the four central units administration, public relations, library and information technology. Research work in long-term projects takes place in the following departments: In the grammar department , research into the grammatical structures of contemporary German language is carried out on the one hand by contrastive typology and on the other hand by corpus-oriented research. In the Lexics department , large text corpora are created to research the lexical inventory of contemporary German and its more recent history, and mathematical-statistical methods are developed and used to break down the language data. In the Pragmatics department , which is dedicated to the investigation of spoken German and linguistic action in conversations, the focus is on the use of language in social interaction, its coordination with physical and spatial resources of action and the connection between linguistic action, social and mental structures. The Department of Digital Linguistics deals on the one hand with linguistic research on text collections (program area corpus linguistics ) and on the other hand with the creation and design of infrastructures for research. In addition, research areas are located under the heading Central Research , which predominantly pursue cross-departmental goals and report directly to the Director.

In the Language in Public Space program area, questions relating to the status and function of the German language in society are examined. The program area thus fulfills an interface function between the public interest in linguistic questions and their linguistic treatment.

The Leibniz Institute regularly publishes series that reflect current linguistic research. The journals Sprachreport and Deutsche Sprache , which are made available to the public, provide regular information on current research results.

With the Archive for Spoken German (AGD), the Institute for German Language has the largest existing collection of sound recordings of spoken German. A part of the stock can be queried on the web via the "Database Spoken German (DGD)" (Head: Thomas Schmidt).

In addition, with the German Reference Corpus (DeReKo) , the IDS provides the largest existing range of German-language text corpora / text collections of written language (more than 43 billion words, as of March 18, 2019). a. can be researched and analyzed via the COSMAS (Corpus Search, Management and Analysis System) II interface. COSMAS II has several thousand registered Internet users at home and abroad.

As a member of the Leibniz Association, half of the institute is funded by the federal government and half by the state of Baden-Württemberg. In addition, there are varying amounts of funds from research-promoting organizations such as the German Research Foundation , the European Union or the Volkswagen Foundation . The IDS also receives funding from the city of Mannheim and the Association of Friends of the Institute for German Language eV

In 2018, the IDS had 239 employees (114 of them scientific employees) and employed approx. 82 assistants. Every year around 80 guest scientists work under the umbrella of the IDS. Ludwig M. Eichinger has been the director since 2003. Henning Lobin has been director of the IDS since 2018 , his deputy Arnulf Deppermann.

The last annual meetings of the IDS (since 2010) with a focus on: