Life in Hell (Engl. Life in Hell ) was a weekly comic -Strip the US cartoonist Matt Groening , which was published in numerous international newspapers. Since 2007 the title of the strip has been Life is Swell (English Life is great ). 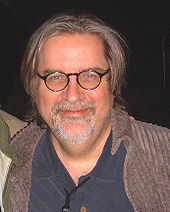 Matt Groening invented Life in Hell in 1977. Originally, the cartoons were only intended for his friends, who he wanted to bring closer to everyday life in Los Angeles in this way . He later sold copies of the comic in a corner of the record shop where he was then working.

In September 1978, Life in Hell was first published in a newspaper, the avant-garde Wet Magazine . The absurd and bizarre stories soon enjoyed great popularity in the Los Angeles underground and art scene. From 1980 the comic appeared in the alternative weekly newspaper Los Angeles Reader .

In 1984, Deborah Caplan, Groening's girlfriend at the time, suggested that Life in Hell be brought out in book form. The first volume, Love is Hell (1986), a collection of comic strips on the subject of love, sold around 22,000 copies.

A year later, Hollywood producer James L. Brooks became aware of the cartoon and commissioned Groening to develop an animated series. For fear of possible failure and the loss of his rights to the characters, Groening decided against a cartoon version of Life in Hell and instead created the Simpsons .

So far, only four comics from the 1980s have been translated into German, as the very special pun in the series is difficult to translate (as things stand so far, it is no longer available for purchase, but can be borrowed, e.g. from the Dresden library). Title: Work is Hell, Being Young is Hell, Love is Hell, Living in Hell.

Matt Groening and his sons Will and Abe also appear frequently in the stories (in the form of a rabbit).

The comics are drawn in a very simple and abstract way and, in terms of style, can best be compared with Groening's later creation, the Simpsons. Life in Hell covers a very wide range of topics (love, loneliness, school, professional life, etc.), which are often dealt with in the form of a monologue . The cartoons are very text-heavy, while the plot hardly plays a role. Many of the stories are based on an autobiographical background.

The comic's humor is black , sarcastic and socially critical. Groening often takes a stand on current events (such as the Gulf War of 1991) or criticizes political decision-makers (especially Ronald Reagan , George Bush and the Republican Party in general). Every now and then elements of surrealism and dadaism flow into the cartoons.