The title of this article is ambiguous. Further meanings are listed under Father and Son (disambiguation) .

Father and Son: Title vignette from the first anthology
Examples 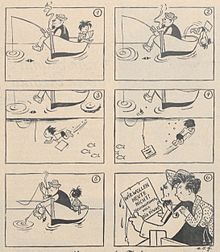 Grandfather and great-grandfather in The Family Slap , 1936 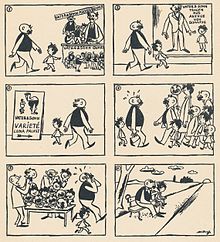 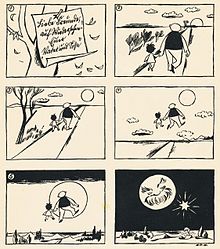 Father and son are the most famous characters of the German draftsman Erich Ohser alias eoplauen (1903–1944). The textless stories are about the experiences of a plump, bald father and his young son, who often find unusual solutions to various everyday problems.

The stories usually consist of three to nine textless images, with a single adventure extending over one, sometimes two pages. The individual stories are i. d. Usually independent of each other. The two main characters, however, in the meantime come to riches ( The Great Legacy , 1937), go overboard and strand on an island ( incident on a summer trip , 1937). The two of them return ( home again , 1938), but wealth is no longer an issue afterwards.

Other people usually only appear once. Exceptions are grandfather and great-grandfather (first appearance in Die Familien-Ohrfeige , 1936), both of which can be seen several times.

In 1934 the editor Kurt Kusenberg was commissioned by Ullstein Verlag to look for a draftsman for a series of drawings to be installed at the Berliner Illustrirten Zeitung . Among the more than 20 draftsmen with whom he had contact, the choice fell on the draftsman Erich Ohser , who had submitted several drafts, including a draft by father and son . Since Ohser was banned from working in the Reich Chamber of Culture due to his political caricatures during the Weimar Republic , a solution had to be found as to how the drawings could be published. The publishing house received permission from the Propaganda Ministry that Ohser could publish “non-political drawings under a pseudonym”. That is why Ohser signed the stories of father and son consistently with eop, with the first two letters representing his initials and the p standing for his hometown Plauen . Later, eoplauen prevailed as his stage name.

On December 13, 1934, the first story of father and son with the title The Bad Homework appeared in the Berliner Illustrirten Zeitung and thus reached an audience of millions. A total of 157 stories were published in the Berliner Illustrirten Zeitung by December 1937, when the last episode of Father and Son was published, although Ohser was temporarily banned from working, which was reversed through the initiative of Ullstein Verlag. In return, father and son had to campaign for the Winter Relief Organization , the 1936 Reichstag elections and the 1936 Summer Olympics . Ohser ended the series at his own request and had father and son say goodbye in issue 49/1937 of the Berliner Illustrirten Zeitung with a picture story in which the two title characters run towards the horizon and then float away into the sky. In the second to last picture story, father and son were horrified that they were becoming the focus of increasing commercialization . In the meantime, caricatures had appeared that made fun of the longevity of the series.

In 1935, Ullstein Verlag published a book with the title Father and Son - 50 Funny Pranks and Adventures with an initial print run of 10,000 copies , which, in addition to 40 picture stories already published, contained 10 new ones; Kusenberg wrote the preface under the pseudonym Hans Ohl . Due to the great demand, the print run was increased to a total of 90,000 copies. Two more books were published in 1936 and 1938; the second book had a circulation of 70,000 copies. After the Second World War , Südverlag Konstanz acquired all rights to father and son in 1948 . Through the Südverlag, which held the rights until December 31, 2014, and various licensees, various book editions with father and son stories were sold in the German-speaking area alone , including some in the East German Eulenspiegel-Verlag , so that the total print run was several hundred thousand books early on included.

Were father and son in 1962 in the time praised "the most popular figures of fun of the century" as such feels Eckart Sackmann "the chosen form" as "even then hopelessly old-fashioned" because "in their unworldly honesty the strips [...] to the Flying leaves the turn of the century [referenced] ”. For Andreas C. Knigge , who dedicates a separate chapter to the stories of father and son in his book 50 Classic Comics , eoplauen has "created a timeless classic, behind the popularity of which the illustrator's fate has been forgotten". For Bernd Dolle-Weinkauff, too, the stories of father and son are “a new classic in visual history in Germany”, but he does not count them among the comics, but rather among the pantomime strips .

An adaptation of the series was produced in 1960 for musical education in schools: Father and Son, a cheerful picture cantata based on EO Plauen: for youth choir, piano, rhythmic instruments and a jazz group by Albrecht Rosenstengel and Paul Diwo.

The father-and-son memorial created by Erik Seidel has stood in Plauen since 1995 : the two figures emerge, hand in hand, from a book. The first installation site was Bahnhofstrasse, and since 2010 it has been in front of the Erich-Ohser-Haus on Nobelstrasse. The founder is the entrepreneur Hans Löwel.

In November 2015 Panini Verlag published the sequel New Stories from Father and Son , drawn by Ulf K. and written by the French Marc Lizano , followed by the second volume in November 2016.