Kurt Erich Ohser (born March 18, 1903 in Untergettengrün , Amtshauptmannschaft Oelsnitz ; †  April 6, 1944 in Berlin ) was a German draftsman and caricaturist , who was particularly famous for his under the pseudonym e. o. plauen created comic strips around the characters father and son became famous.

When Erich Ohser was six years old in 1909, the family moved to Plauen . There he successfully completed an apprenticeship as a locksmith and then studied against the will of his parents from 1921 to 1926 in Leipzig at the State Academy for Graphic Arts and Book Industry . He also worked for the Neue Leipziger Zeitung , where he was introduced to Erich Kästner by his editor Erich Knauf . The friendship of the "three Erichs" began. After graduating, Ohser quickly became known as a book illustrator (including illustrating Kästner's volumes of poetry) and as a caricaturist (for example with the SPD newspaper Vorwärts ). In particular with his caricatures of Hitler and Goebbels , he drew the hatred of the National Socialists . Together with Kästner and the Hanoverian photographer Hein Gorny he went on trips to Paris , Moscow and Leningrad (where his rejection of communism developed). In 1930 he and his fellow student Marigard Bantzer married , their son Christian was born the following year († 2001).

The takeover of power by the NSDAP regime meant the end for the political illustrator Ohser. His application for admission to the Reich Press Chamber was rejected, which amounted to a professional ban. From then on, his wife had to take care of the family. At the end of 1934 Ohser applied to the Berliner Illustrirten Zeitung , which was looking for a comic - similar to Mickey Mouse - with a design by father and son . Ohser was not allowed to publish under his real name. He was only accepted after he had acquired the pseudonym e.o.plauen (his initials and the name of his hometown), and on the condition that he was not politically active. In December 1934 the first picture story of father and son came out, which then appeared weekly for three years in this respected and high-circulation magazine. The publisher also published three book editions, all of which were successful. After that, eoplauen alias Erich Ohser was allowed to continue working and in 1940 joined the weekly magazine Das Reich . There he became known as a cartoonist, with his Stalin caricatures being considered particularly successful. In the "Deutsche Zeichenfilm GmbH" founded by Goebbels in 1942, Ohser worked with Manfred Schmidt , the inventor of Nick Knatterton , on the 17-minute cartoon Poor Hansi , which was released in 1944. Content of the film: The canary Hansi escapes from his cage because he has fallen in love with a swallow flying by . But because the husband of the beloved reacts rather rudely and in view of the dangers that Hansi experiences outside the bars, he returns ruefully to his cage, where he is expected by a lady canary. 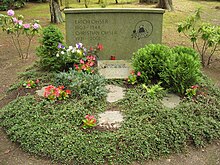 The Ohser family grave in the main cemetery in Plauen

Ohser could not keep his aversion to the NSDAP regime to himself in the long run. A Denunziationsschrift over Ohser from its neighbors Bruno Schultz , a captain in the department Wehrmacht propaganda of the High Command of the Wehrmacht , was handed over on 22 February 1944 Goebbels. Ironically, a friend Erich Ohsers, in the wheel of Goebbels, for the disinformation competent the foreign office Schwarz van Berk active journalist Gerhart way , was tasked with checking the credibility of the witness Schultz and confirmed in a memorandum of 7 March 1944 " that the information contained in his note of February 22, 1944 corresponds to the facts ”. On March 28, 1944, Ohser and his friend Erich Knauf were arrested. The trial before the People's Court should be opened on April 6th by Roland Freisler . Ohser hanged himself the night before. Knauf was executed in May . Until 1968 the urn with Ohser's ashes was buried in Reichenbach an der Fils ; after that, according to Ohser's request, she was transferred to the family grave in Plauen.

The father-and-son picture stories are Ohser's best-known works to this day. They are about a father and his little son who struggle with the problems of everyday life and sometimes also have great adventures. They quickly became popular and are known in many countries around the world - probably also because the majority of them do not require text.

The father-and-son monument by the sculptor Erik Seidel was first erected in 1995 in Plauener Bahnhofstrasse. Since 2010 it has been at its new location in front of the Erich-Ohser-Haus on Nobelstrasse.

In Plauen the vocational school center "BSZ eoplauen" is named after Erich Ohser.

In 1999 Erich Ohser was honored with a Berlin plaque at the house at Am Feldberg 3 in Berlin-Kaulsdorf , his last place of residence. In the Dudenstraße 10 was on 30 November 2013 at the house of printing a stumbling block laid for Erich Ohser.

A street in Bremen was also named after him, Ohserstraße.

The fate of Erich Ohser and Erich Kästner is the theme of the film Kästner and Little Tuesday (2017) .

On March 18, 2018, the Internet search engine Google commemorated Ohser with its own Google doodle for the 115th birthday of Ohser .