The lily is next to the cloverleaf a central symbol of Scouting . Their representation varies depending on the Scout Association, all of the Boy Scouts in the World Organization of the Scout Movement (WOSM) wear their symbols - a silver lily on a purple background - as a common symbol, usually in addition to their own association badges.

Robert Baden-Powell , the founder of the Boy Scouts, chose for the Scouting the compass lily (on old nautical compasses was the North-setting mark of the compass rose adorned with a lily) as a sign of orientation on the path of life.

Origin of the diamond lily

The design of the diamond lily, as it was and still is used in various modifications in Germany in the interdenominational area of ​​the scout movement, comes from Christian Rietzschel and was created in 1926 for the New German Scout Association .

The Boy Scout Association Großer Jäger and the Association of German Boy Scouts use today a very strongly modified form of the original diamond lily.

A fleur-de-lis , a stylized iris flower , serves as a symbol . In order to avoid confusion with the symbol of the House of Bourbon and the associated political implications, other symbols are usually added; in many associations worldwide as well as under the sign of the WOSM these are two five-pointed stars, which with their ten points stand for the ten points of the original scout law . The lily itself is a symbol of purity and peace, the three tips stand for the three points of the boy scout promise . The surrounding rope with the weaver's knot symbolizes the cohesion of all scouts around the globe . 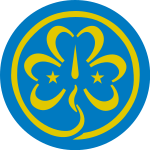 Shamrock of the World Association of Girl Guides and Girl Scouts