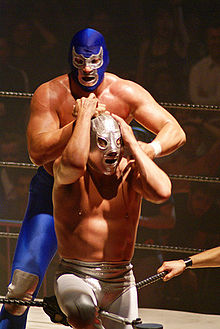 Lucha Libre (Spanish for freestyle fighting ) is a form of professional wrestling that was developed in Mexico . Lucha Libre dates back to the early 1930s when Salvador Lutteroth brought to Mexico American wrestlers he saw during his time in Texas . A person who operates Lucha Libre is called a Luchador (male, plural form Luchadores ) or Luchadora (female, plural form Luchadoras ). Because most wrestlers in Mexico are smaller than their counterparts in North America, the emphasis is not as much on power actions as in the US or Canada . Mexican wrestling is characterized by both quick sequences of handles and maneuvers and spectacular high flying , some of these fighting techniques also being adopted north of the border.

The rules are similar to American wrestling. You can win matches if you keep your competitor on the mat while the referee counts to 3 ( pin ), forces him to give up, the opponent is counted outside the ring (referee counts up to 10), or by disqualification. Task is usually signaled verbally or by waving the hands. The tapout , which is popular in Japan, has little meaning in Mexico. Using the ropes for leverage is not allowed. As soon as a Luchador touches the ropes, his opponent has to give up all holds and cannot "pin" him. Disqualifications occur if the opponent uses an unauthorized grip or an unauthorized maneuver, hits someone in the groin, uses outside interference, attacks the referee or pulls the opponent's mask completely off. Most matches have 3 winning rounds; whoever has reached 2 pins first is the winner. If the rest period between 2 rounds is not observed, the referee can reverse the decision of the last round by calling rudisimo excesivo (excessive force).

The predominant type of match in Lucha Libre is a six-man tag team match , the Relevos australianos ( Spanish ; "Australian tag team match" (literally: "Australian relay")), although this outside (sic ) Mexico are commonly referred to as Tríos matches ("Trio-Match"). The matches usually have two referees and each of the teams has a captain . To win, either one captain must pin the other or any two members of a team must be pinned. If the legal (= in the ring allowed) man the ring leaves, can it replace another team member without the latter for a substitute to be; the Referee can also name any two Luchadores as legal participants. In traditional tag team matches with two-man tag teams , both team members must be pinned.

Masks have been used since the mid-1930s and go back to wrestlers such as El Enmascarado ("the masked one"), the Irish Ciclón McKey and La Maravilla Enmascarada ("the masked wonder"). The first masks were very simple in basic colors to distinguish the luchadores. In the modern Lucha Libre, masks are colorfully designed to evoke images of animals, gods, ancient heroes or other fantasy figures, into whose identity the Luchador slips during the fight. Almost all Luchadores in Mexico begin their careers in masks, but almost all of them are unmasked at some point in their careers. Sometimes a luchador who is scheduled to resign is unmasked in his last fight or at the beginning of his last tour, causing the depicted figure to lose its identity. Luchadores are also often seen wearing their mask in public during their careers. In principle, the mask can be equated with the Luchador. El Santo , a very popular luchador, wore his mask even after his resignation, did not reveal his true identity until old age and was even buried with his mask on. The figure was omnipresent.

Some famous matches were based on the premise of Luchas de Apuestas (fights with stakes). The match with the highest cult status is máscara contra máscara (mask against mask), where two masked luchadores bet on their masks and the loser is unmasked by the winner and his real name is officially revealed. The older a Luchador gets without being unmasked and the more often he successfully defends his mask, the higher his status. Another well-known type of fight is máscara contra cabellera (mask against hair), where a masked and an unmasked wrestler compete against each other (usually the unmasked wrestler lost his mask to the masked wrestler in a previous match); if the masked luchador wins, the unmasked one has to have his hair shaved off, which is another sign of humiliation. If the unmasked wins, he keeps his hair and the loser is unmasked. For two unmasked wrestlers there is also cabellera contra cabellera (hair against hair). Many wrestlers lose such fights at the end of their careers because it represents their ultimate defeat and the promoter often gives a wrestler a large amount of money for the loss of his mask / hair. 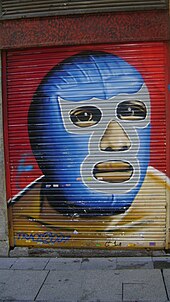 Graffito of a wrestling mask in Madrid , Spain

Lucha Libre is rooted in Latin America and has its own, more detailed system of weight classes than, for example, modern North American pro-wrestling. Similar to old European (especially British), Japanese or the original North American wrestling, Lucha Libre has a similarly detailed weight class system as professional boxing. There is an upper limit in each weight class, although there have always been champions who have become too heavy for their respective class. The following lists the weight classes as determined by the Comisión de Box y Lucha Libre Mexico DF (Mexico City's Boxing and Wrestling Commission).

In the United States (USA) :