The manifesto of evolutionary humanism was written in 2005 by Michael Schmidt-Salomon on behalf of the Giordano-Bruno-Stiftung (gbs) and sold over 50,000 times. Further editions appeared in English and Polish. 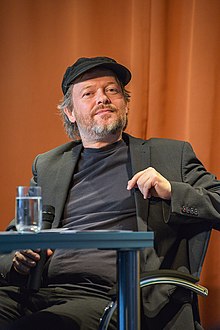 After the Giordano Bruno Foundation (gbs) was founded, the decision was made at the first foundation meeting in 2004 to create a basic text on evolutionary humanism . The font was initially started as an internal foundation paper by gbs co-founder Michael Schmidt-Salomon and then proposed to Alibri Verlag for publication. The first edition appeared in 2005.

In 2009 Schmidt-Salomon made the thirteenth chapter of the manifesto on naturalistic ethics the main theme of the book Beyond Good and Evil . He deepened the seventeenth and final chapter in 2014 in the book Hope Man. A better world is possible . According to Deutschlandfunk Kultur, various ideas of the manifesto were further developed in the work Relaxing! A philosophy of serenity from 2019.

Schmidt-Salomon advocates a naturalistic philosophy in the manifesto of evolutionary humanism . These ideas have philosophical precursors in antiquity. The expression of evolutionary humanism is traced back to the work of the same name by Julian Huxley from the 1960s. The manifesto is based on an image of the cosmos in which everything "above board approaching" in which there is no metaphysical mythical creatures (gods, demons, witches or goblins), the (supernatural) on supranaturalistic way by miracle intervene in world affairs. The introduction says that humanity would live in an "age of non-simultaneity":

"While we are technologically in the 21st century, our worldviews are still shaped by legends that are thousands of years old. This combination of the highest technical know-how and the most naive children's beliefs could have fatal consequences in the long run. We behave like five-year-olds who are responsible for a jumbo jet was transferred."

In seventeen chapters, Schmidt-Salomon explains that a logically consistent, empirical and ethical view of man and the world must be based on the results of scientific research. The traditional religions as well as some traditional forms of humanism could no longer fulfill this task. He deals with topics such as the development from traditional to evolutionary humanism and its understanding as an "open system", the anthropological foundations of an evolutionary-humanistic ethic, the enforcement of human rights "against the bitter resistance of religions" and the "rules of the game" for a human one Together. Science, philosophy, and art are referred to as the cultural pillars of evolutionary humanism. In the chapter "Do you still believe or are you already thinking?" it is stated that the rational belief in science should not be confused with a belief in science. Beyond fundamentalism and arbitrariness, a "leading culture of humanism and enlightenment" must be developed.

In comparison to the Ten Commandments of the Bible ( Exodus 20, 1-21) printed in Appendix A, Appendix B contains ten offers of evolutionary humanism . In the preliminary remark it says:

“The ten 'offers' were not made by any god, nor were they set in stone. No 'dark cloud' should frighten us in the search for appropriate guidelines for our lives, for fear is seldom a good advisor. It is up to each individual to check these offers rationally and without fear, to accept them, to modify them or to reject them entirely. "

The short version of the offers is:

In 2012 a Polish translation was published by Dobra Literatura .

An English translation was published as an e-book in 2014.

In 2009, Karen Duve wrote in Der Spiegel that the manifesto was an "astute and burning current" analysis.

The appendix with the ten offers was published by the gbs as a brochure for use in ethics and religious education.

Today the Manifesto of Evolutionary Humanism is the most widespread representation of this worldview in German-speaking countries with a sold circulation of 50,000 copies.

Nonfiction
Knowledge from Engagement  | Manifesto of Evolutionary Humanism  | The Church in Your  Mind | Beyond good and evil  | Leibniz was not a shortbread biscuit  | Instructions for being blissful  | No power to the stupid. A polemic.  | Hope human  | Last Help  | The limits of tolerance

Children's books
Where do you go to God? asked the little piglet  | The story of the cheeky dog  | Susi Neunmalklug explains evolution  | Big Family