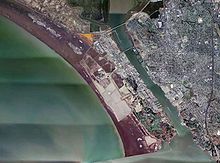 Aerial view of the area, the shipyard is on the left bank of the river

The Mare Island Naval Shipyard was the United States Navy's first shipyard on the Pacific coast. It was on Mare Island , California. The nearest town is Vallejo , directly across from the island in the Napa River .

The MINS opened on September 16, 1854 after the US Navy had acquired the island for $ 83,491 a year earlier. First in command of the shipyard was David Glasgow Farragut . The floating dock had been ordered as early as 1852; it was built in New York and brought in parts via Cape Horn to Mare Island, where it took up a ship for the first time in February 1855 (the St. Mary’s ). The first ship built on Mare Island was launched in 1859, the USS Saginaw . In 1912 the USS Jupiter was launched in the Mare Island Naval Shipyard and was later converted into the US Navy's first aircraft carrier , the USS Langley . The platform on which Eugene Burton Ely made the first landing with a wheeled aircraft on a ship on January 18, 1911 was also built on the cruiser USS Pennsylvania at the shipyard .

The battleship USS California was the largest ship ever built on the west coast. When it was launched on November 20, 1919, however, the retaining cables tore, so that the ship crashed into a pier on the opposite side of the river. Although the California sank a number of small boats with her stern lake and demolished the pier facility on the Vallejo front, the damage was limited. The ship itself suffered no relevant damage at all. And the city of Vallejo never sent the Navy an invoice for the restoration of the pier. Mare Island also built other large warships in a row.

The USS Nautilus in 1985 in the shipyard

During the Second World War , shipyard activity peaked when over 46,000 people were employed. Countless repairs and modernizations for the gigantic Pacific fleet were carried out here. The shipyard became particularly well known for the unusually lively photographic documentation of the work. The huge photo collection, which has since been declassified and published, is today one of the most important archives for reconstructing the appearance of American warships in World War II with its numerous large-format detailed photos.

Between 1954 and 1970 the shipyard built 17 nuclear submarines . From 1970 no more ships were built, the shipyard was used entirely for overhauls, mostly of submarines. In May 1975 the shipyard was granted National Historic Landmark status. From 1979 the USS Nautilus was restored in the MINS for the exhibition as a museum ship .

In 1993, the Base Realignment and Closure Program decided to close the shipyard, and this decision was implemented on April 1, 1996. While parts of the shipyard have been transferred to other government agencies, other parts are used for civilian purposes.

One of the special features of the shipyard was its own observatory, which was built in 1865, equipped with a five-inch refractor in a hinged door dome, and was not dismantled until 1931.

In 1965 the MINS launched a submarine called the USS Mariano G. Vallejo , which was named after Mariano Guadalupe Vallejo like the nearest town . The tower of this boat was taken to the decommissioning and again shipyard and exhibited there.