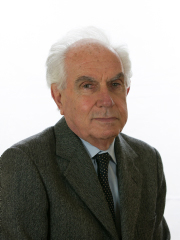 Tronti was one of the most important theorists of operaism , a Marxist movement in the 1960s. He wanted to found a militant organization under the Communist Party of Italy (PCI) and make the revolution the program of the workers' movement again. His essays appeared in Raniero Panzieri's magazine Quaderni rossi and, after the QR was split into a Panzieri and a Tronti group in 1963, in Classe operaia , written by himself, Romano Alquati , Antonio Negri and others. a. will be carried. This group also split (1966) and while Negri moved further and further away from the PCI in the direction of potere operaio and workers' autonomy, the group around Tronti (who had left in 1958) rejoined the party and tried to radicalize it from within.

In 1992 Tronti was elected to the Senato della Repubblica for the first time as a representative of the successor party to the PCI - Partito Democratico della Sinistra (PDS; Democratic Left Party) , where he represented the Lazio region until 1994 . In the course of the parliamentary elections in Italy in 2013 , Tronti received another Senate mandate, this time on the list of the Partito Democratico in Lombardy .