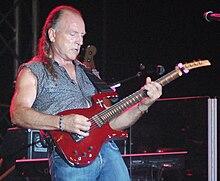 Mark Farner (born September 29, 1948 in Flint , Michigan ) is an American singer, guitarist and songwriter . He became known as the singer and lead guitarist for Grand Funk Railroad . The band recorded 17 albums, sold 25 million records and went on multiple world tours.

Mark Farner played a repertoire of teenage bands at high school events, weddings, and local occasions during his teens. After leaving school, he played with the bands Terry Knight and the Pack , The Bossmen (with Dick Wagner ), later again with Terry Knight and the Pack and finally with The Pack , without Terry but with Don Brewer as drummer, who was later also the drummer for Grand Funk Railroad .

In 1977 Grand Funk Railroad broke up temporarily, a year later Mark Farner signed a solo contract with Atlantic Records , which resulted in two albums being released, Mark Farner and No Frills .

In 1981, Grand Funk Railroad got together again and released two more albums.

Farner released four contemporary Christian albums between 1983 and 1994 after he found his Christian faith towards the end of his grand funk days. Because of these albums he was nominated for the Dove Prize . With the John Beland composition Isn't it amazing he reached number 2 in the charts.

In 1995 Farner toured with Ringo Starr's All Star Band , then with the Northwest Allstar Band , before re- launching Grand Funk with bassist Mel Schacher and Don Brewer to organize a benefit tour for Bosnia. As a result, the album Bosnia was released on EMI . From 1996 to 1998 Grand Funk toured again and achieved a placement in the "Poll Star Top 100 Tours 1998". The radio show "VH1 - Behind the Music" has been playing Grand Funk songs more often since 1999. A "best of collection", the "Grand Funk Anthology" was released in 1999 on Capitol Records .