As mass storage are in the IT range storage media refers to the large amounts of data permanently stored. According to this definition, volatile memories such as conventional RAM are not mass memories , regardless of their size. 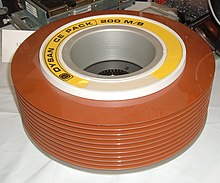 A removable hard drive package from the Dysan company from the 1970s on which around 200 Mbytes of data could be stored. The diameter is approx. 36 cm.

A microSD card, as used in smartphones , for example , compared to the size of a euro coin. Such cards are available with up to 512 GB of storage space (as of 2016), which corresponds to about a thousand times the amount of data on the removable hard drive above.

Due to the general development in the computer sector, the term “large amount of data” naturally depends heavily on the current circumstances. Accordingly, a mass storage medium is understood to mean data carriers with ever increasing capacities over time. However, over the course of time, the mass storage device is larger and slower than the main memory used at the same time . Programs and data on a mass storage device are almost never processed directly by a main processor . For this purpose, they are first copied ("loaded") into the main memory and processed there. The results can then be written ("saved") back to the mass storage device if necessary.

Hard drives have been of greatest importance as mass storage for over thirty years . The development of their capacity has kept pace with the general development: at the beginning of the 1980s they could store 10 megabytes , today they can store several thousand gigabytes . Their speed has also increased significantly, but not to the same extent as their capacity. Solid state disks have been gaining in importance for a number of years .

Depending on the size definition, there are media such as punched cards , punched tapes , magnetic tapes , floppy disks , optical disks (including read - only CD-ROM , DVD -ROM and BD-ROM and their versions that can be written to one or more times) and flash memory media such as USB sticks and CompactFlash cards can also be described as mass storage devices. Your advantage is the simple mobility and usability as a removable medium in any device with a corresponding drive, slot or suitable interface .

In general, it is not only the capacity of mass storage that is of interest, but also the following factors, depending on the area of ​​application: