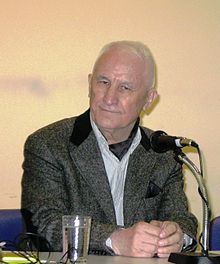 Matija Bećković ( Serbian - Cyrillic Матија Бећковић ; born November 29, 1939 in Senta ) is a Serbian poet of Montenegrin origin. He is a permanent member of the Serbian Academy of Sciences and Arts.

Bećković was born in Senta , in the north Serbian province of Vojvodina in what was then the Kingdom of Yugoslavia as the son of Montenegrin Serbs. He graduated from high school in Valjevo in 1958. He then moved to Belgrade and studied Yugoslav literature there, where he still lives today as a freelance writer. Since 1991 he has been a permanent member of the Serbian Academy of Sciences and Arts.

Bećković's first volume of poems, a long surrealist love poem Vera Pavlodoljska appeared in 1962; Metak lutalica the following year. In 1965 the collection of poems Tako je govorio Matija came out, which contains some of his most famous early poems. In 1970 he published his first collection of dialectical poems, Reče mi jedan čoek ; this was followed by a collection of absurdist essays ( Dr. Janez Paćuka: o medjuvremenu ).

He has also published dramas and is generally known for his committed but ironic attitude, as well as his dialectical awareness for satirical comments. Due to the amalgamation of Montenegrin phraseology and dialect, he is one of the most well-received authors in Serbia.