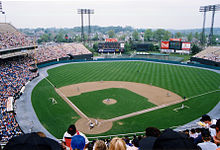 View of the stadium

Two different stadiums were located here, the Baltimore Stadium or Municipal Stadium or sometimes Venable Stadium , which was called in 1922, and the multi-sport stadium Memorial Stadium , built in 1950 . The stadium was also some time Babe Ruth Stadium named in relation to the time, born in Baltimore Babe Ruth . Other nicknames for the stadium are The Old Gray Lady of 33rd Street or, mainly used for Colts games, The World's Largest Outdoor Insane Asylum .