Metal Slug ( Jap .: メタルスラッグ , Metaru Suraggu ) is a 2D - Shoot-'em-up - video game series of the company SNK for Neo-Geo ticket machines and home consoles. There are also offshoots for the in-house Neo-Geo-Pocket and ports to other consoles such as the PlayStation or Xbox .

Metal Slug is played in a similar way to Contra / Probotector or Turrican . As is typical for the genre, the player runs through mostly horizontally scrolling levels and tries to advance as far as possible by eliminating opponents. The score ( high score ) is increased by collecting valuables and freeing prisoners. A variety of weapons and power-ups are available to the player.

At the end of each level a huge boss is waiting to be destroyed. What makes the game stand out from the crowd is, on the one hand, the ability to climb into the eponymous Metal Slug (a tank ) and, on the other hand, the developer's attention to detail. Where other games have long been in the 3D guise, Metal Slug still uses 2D raster graphics , which means it can be counted as a kind of retro genre today.

One of the most striking features of the Metal Slug series is the large number of destructible environments, including not only houses but also terrain as in Metal Slug 1 and the sometimes very brutal demise of opponents. Even if the red blood is replaced by a white liquid in some versions of the game, the death animations have remained the same. The use of grenades or the shotgun sometimes "shreds" entire groups of opponents. However, the game is designed more for fun than brutality; the sometimes very demanding levels even challenge veterans of the genre. 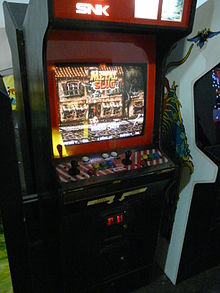 At the beginning of the 21st century there is war between two armies: the regular army of the world government and rebels who seek a military dictatorship and are led by General Morden. In 2026, the so-called metal slugs (special tanks) were developed, which the rebels stole two years later. A special force called the Peregrine Falcon is dispatched to destroy them.

After the plan of Murden was foiled by the Peregrine Falcon , this alliance with the Martians. However, these only want to play off the rebels and the regular army against each other in order to weaken the military, and finally to conquer, and take him prisoner. In the final mission, the rebels and the regular army team up to repel the aliens. In the end, a rebel soldier steers his spaceship into the cannon of the Martians, they release Mordon and withdraw.

Mordon and his rebel army are back. The Peregrine Falcon and a 2nd Special Forces, the SPARROW team up to defeat them again. Finally it turns out that the Martians are behind it again, who only sent a Martian disguised as Mordon to earth. Together with the remaining rebel army, they storm the mother ship and destroy it. The leader of the Martians, Rootmars , is sunk in the sea.

Years after the rebels were destroyed, a mysterious organization, the Amadeus Syndicate , attacks the world with a cyber virus. Once again, the Peregine Falcon is sent on a mission to crush the Syndicate and destroy the virus. They fight their way through to Amadeus (who was often seen in the background in Metal Slug 2 / X) and destroy him together with his laboratory.

The latest generation of metal slug data was stolen by the Ptolemaic Army . The two teams are sent again to retrieve the data. After fighting their way through the Corridor of Fire , they encounter Scyzer, a demon that they destroy.

If you start out against soldiers or locals (depending on the part) quite realistically at the beginning, the game usually ends with a fight against alien invaders, which was always garnished with gags. The ending sequence of Metal Slug 2 is reminiscent of e.g. B. very much on the film Independence Day .

For this purpose, Metal Slug 2 and X ( Metal Slug 2 Deluxe ) apparently make use of some very bizarre conspiracy theories from UFO literature. So was the story around which after the Second World War, settling Nazis , in submarines their secret Haunebu shipped easily mess out. Their prototypes (hoarding, etc.) are always found in abstract form as monsters in the game. Arabia - and Egypt - like levels based on Indiana Jones were obviously not to be missed.

The rebels have been hit by the previous missions. Now Peregine Falcon and SPARROW storm the last rebel bastion on Garbage Island and destroy the last rebels.

Metal Slug is also available on other consoles (for example PlayStation , Saturn , Xbox ) and even for cell phones ( Metal Slug Mobile ). There is also an officially licensed version of Metal Slug 5 for the PC for the Korean market . The 2007 Metal Slug Anthology contains parts 1–2, X, and 3–6. In 2009 Bluestone Games released a Metal Slug Collection for the PC ( UK only ) , which also contains all parts. On February 14, 2014, Metal Slug 3 was released on Steam.