The story of the three kingdoms 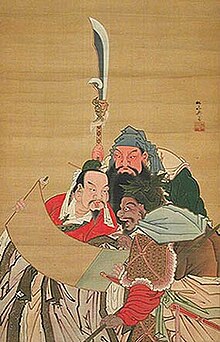 The Story of the Three Kingdoms ( Chinese  三國 演義  /  三国演义 , Pinyin Sānguó Yǎnyì ) is a novel by the Chinese author Luo Guanzhong about the turbulent times of the Three Kingdoms (approx. 208-280) and is one of the most popular Chinese novels . It is counted among the four classic novels of Chinese literature . The current version dates from the 17th century and was published in 1679. It comprises 120 chapters. There is also an older version from 1522 with 240 chapters. In the German-language translations, the title of the novel is shortened to Die Drei Reiche .

There is no central plot, but the novel forms a large historical painting, which consists of individual episodes that are self-contained and contain an immense variety of characters. It is shaped by political and military conflicts that lead to state affairs, intrigues , battles and skirmishes . Strategy and ruse also play a role.

It tells of the fall of the eastern Han dynasty to the emergence of the three kingdoms. The book begins in 168 with the Yellow Turban Revolt that shook the Eastern Han Dynasty in 184. A period of 100 years is then described chronologically. First, the Han military begin to seize power, especially Dong Zhuo and Cao Cao . Liu Bei is distantly a member of the ruling family. In a scene in the peach garden, he takes a brotherly oath with Zhang Fei and Guan Yu , because he wants to fight the uprising and restore the power of the dynasty. Liu Bei's and Sun Quan's army defeat the usurper Cao Cao in the Battle of the Red Wall in 208, whereupon the Three Kingdoms emerge.

The novel represents the first appearance of Yanyi , the tradition of creating novels as an interpretation of historical sources, especially dynasty stories. Historical sources of the novel, which is said to be based largely on fact, are the Sanguo Zhi , the Chronicle of the Three Kingdoms , and other writings of official historiography. The Sanguo Zhi not only records historically verifiable events, but legends and anecdotes are already in this work.

Since the Tang period at the latest , the material collection of the history of the three realms has been the subject of storytellers as a preliminary form. Regarding the Song era, there are sources that there may have been a school of professional storytellers specializing in the subject. Stories about the three realms were also processed in the Chinese drama , the southern one of the Song period and the Zaju of the Yuan period . Another source of Chinese dramas is a rough historical narrative that was printed between 1321 and 1323, the Sanguo zhi pinghua ( Popular Tale of the Story of the Three Kingdoms ).

In the novel, the wealth of material from these narrative traditions was processed into a multi-layered epic .

The novel is based on the Confucian principle of legitimate succession to the throne. Likewise, the principle of justice and friendship (Yi) becomes a criterion for evaluating events and people. With regard to the staff of the novel, Luo Guanzhong deviated in part from historical statements and created striking and lively characters that have an after-effect in the people to this day. For example, Liu Bei appears as an exemplary, just and legitimate prince, Zhuge Liang embodies wisdom and emerges with supernatural powers, Zhou Yu plans hapless strategies, and Cao Cao embodies a villain who has become proverbial in China.

The novel is written in easy-to-understand literary Chinese , and its structure and structure are related to the oral storytelling traditions. The portrayal of the characters is characterized by the tension and drama of the actions and dialogues, but there are no descriptions of emotional processes.

The history of the Three Kingdoms had a significant impact on the oral literary tradition of China and moral values. Stratagems developed in the novel are still used in military theory textbooks to this day.

In 2008, the novel was filmed in a South Korean-Chinese co-production under the title Three Kingdoms - The War of the Three Kingdoms (original title: San guo zhi jian long xie jia ).