Microsoft Works was an office suite that did the following: word processing , spreadsheet , database management and, depending on the version: terminal for modem connections, scheduling and contacts. In contrast to Microsoft Office , however, the individual components did not have advanced properties, so that, for example, a spreadsheet document could not contain more than one table at a time, the word processor could not handle named paragraph styles, and a database could only manage one table at a time.

With the appearance of Office 2010 , the development of Works was stopped. Product support also for program updates for Works 9 ended on October 9, 2012 and for Works Plus 2008 on January 8, 2013. B. with security updates was not operated.

From an economic point of view, Microsoft tried to cover the budget segment below Microsoft Office. It was particularly common in OEM / SB / DSP sales together with a computer, although competition from other proprietary products such as Lotus SmartSuite or more extensive, free and free products such as OpenOffice.org and web-based online office offers such as Google Drive was great was.

Works tried to support the user in his daily work with the help of assistants. This was particularly advantageous for inexperienced occasional users who would have been overwhelmed with the many functions of this office package.

A Works database was integrated in the program package from the first version on, which has been continuously updated over the years. Basic database operations could be carried out and data stocks of any kind could be managed, in connection with the Works word processor, also with mail merge functions.

Databases created with Works were saved by default in a separate file format with the extension * .wdb. Storage in other formats could also be selected. (see # supported file formats )

With the help of the Works spreadsheet, calculations could be made in tables. This part program was comparable with Microsoft Excel . Works, however, does not support all of the functions known from Excel and there is no automation using Visual Basic for Applications .

Tables created with Works were saved by default in a separate file format with the extension * .wks. Storage in other formats could also be selected. (see # supported file formats )

With the Works word processor, texts such as essays, letters or serial letters could be written. The latter were particularly helpful for clubs and small businesses.

The program was comparable to Microsoft Word , but some of the functions known from Word, such as B. in paragraph formatting the paragraph control has been omitted.

At least since version 2.0, the spelling checker, hyphenation and thesaurus have been integrated. It was also possible to create an additional user dictionary. Mathematical formulas and Works spreadsheets could be entered and displayed as embedded objects like in Word. Tables, graphics, drawings, diagrams, clip art, WordArt, Note-It and objects could also be inserted into the document. The autotext function (at least from v4.5) made it possible to save a greeting, a special note or any other information. By simply clicking a button, it was then inserted into the document. The mail merge function made it possible to insert database fields, thus generating variable sections depending on the addressee.

Texts created with Works were saved by default in a separate file format with the extension * .wps. Storage in other formats could also be selected. (see # supported file formats )

The DOS and Windows versions (at least up to v4.5a) included the possibility of data transfer via modem.

Data transfers created with Works were saved in a separate file format with the extension * .wcm by default.

Works was able to open, process and save files from various Office applications. An uncomplicated exchange with other applications was thus possible.

Microsoft Home Essentials and the Microsoft Works Suite were almost identical to the respective Microsoft Works editions. The main difference lay in the fact that in addition to the Works word processor, a current full version of Microsoft Word and other useful additional programs for private users were included (see below).

Microsoft Works Plus 2008 included Works 9 with word processing, spreadsheet, database, calendar, e-mail, and Internet tools. The two most important innovations were the PowerPoint Viewer and the increase in document security through an "Auto-Save" function. Microsoft Word 2003 was also included in Works Plus 2008 . This “Word Works combination” corresponded to the previous Works Suite , but without the programs Encarta , AutoRoute and Foto Suite . 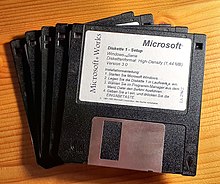 Current Microsoft Office versions do not offer the file extension WDB (Works Databases), WKS (Works Tables) or WPS (Works Texts) when opening. The converters offered for download by Microsoft support MS-Works 6 to 9, but not older versions and only as a plug-in for older MS-Office 2000 to 2003. If you need to access old documents, you can use LibreOffice (for example 4.1.3 ) and then reuse it as XLS, XLSX, DOC or DOCX format in current Microsoft Office versions. A loss of individual formatting cannot be ruled out and LibreOffice also provides a corresponding note. Works also supports the conversion program FileMerlin (formerly WordPort ) in versions 1.0 / 2.0 (DOS) and 3.x / 4.x (Windows).

The easiest option, however, is to open the files with MS Works before switching to another program and then to save them in a universal or Office format.

Microsoft advertised Office Starter 2010 as a replacement for Works, and in many cases it was delivered pre-installed with new computers with Windows Vista and Windows 7. It was for the end user thus free, but really only in purchasing a new computer pre-installed with Windows, and Office Starter 2010 also from the original equipment manufacturer ( English OEM ) preinstalled. Resourceful users found a way to install the program themselves, although Microsoft did not intend it to be a free version for users with an existing computer. Office Starter 2010 consists of versions of the programs Word 2010 and Excel 2010 with limited functionality and uses the same * .docx and * .xlsx file formats as the full versions, but contains advertisements. It is not a direct successor to Works.