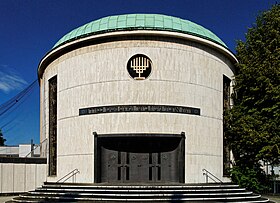 The New Synagogue is located on Paul-Spiegel- Platz on the corner of Zietenstrasse in Golzheim . It is the community center of Jewish life in Düsseldorf .

In 1953, after the Great Synagogue was set on fire during the November pogroms 1938 on November 10th and the ruins demolished on November 29th of the same year, the plan was developed to build a new synagogue. It was built by the Düsseldorf branch of the Aachen construction company Grünzig GmbH . The community and the public celebrated the laying of the foundation stone on November 9, 1956.

The planning architect was Hermann Zvi Guttmann from Frankfurt , who provided the designs for a large number of synagogues during the reconstruction phase . The synagogue, community hall and administration building were finally inaugurated on September 7, 1958 ( Rosh Hashanah ) in the presence of Prime Minister Franz Meyers . The synagogue has around 400 seats (250 for men, 150 for women on the gallery).

The new synagogue , the house of worship of a unified congregation , describes an oval in its outer shape. It is covered with a flat copper hood and clad with light natural stone panels on the outer walls. Inside it has curved walls and “compact shapes ... with curves” and evokes “reminiscences of the closed, geometric style of the 1930s”. Typical of Guttmann's synagogue architecture are, in addition to the rounded shapes, large window openings with vertical emphasis and structure, lettering on the main facade and the structural shielding of a community center that complements the synagogue. Above the main portal, which is open on special occasions, is Psalm 26.8 in Hebrew : "Lord, I love the place of your house and the place where your honor dwells."

On October 2, 2000, an arson attack was carried out on the synagogue. The public reaction sparked the " uprising of the decent ". The perpetrators were two young men of Arab origin.

In 2007 the square in front of the synagogue was named after the President of the Central Council of Jews in Germany in Germany, Paul Spiegel , who died in 2006 .

In 2009 and 2010, the Leo-Baeck-Saal was extensively rebuilt and expanded according to a design by the architectural office Rhode Kellermann Wawrowsky .