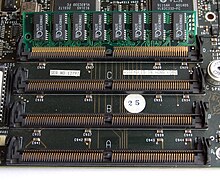 Four PS / 2 SIMM slots on an i386 board. The memory modules snap into place at an angle.

PS / 2 SIMMs are slightly wider than their 8-bit predecessors (see SIMM ) and have a notch in the middle of the contact strip (in addition to the recess on the edge, which prevents misorientation). There are many different types of memory in the form of PS / 2 modules. The best known are FPM and EDO . The initially spread F ast p AGE M emory modules ( FPM ) were treated with the introduction of the Pentium processors by EDO (-Speicher E xtended D ata O utput ) out of the market. EDO is around 10 to 30% faster than FPM in memory access . System-specific PS / 2 SIMMs with automatic error detection ( parity ) or even error correction (ECC, error-correcting code) were often used for use in the professional sector . These are usually specially wired and cannot be exchanged between different computer types.

On the late i486 motherboards there are two to four slots for PS / 2 SIMMs, which can usually be equipped with any number of modules. On i586 and newer motherboards until they are replaced by SDRAM - DIMM modules, there are usually four, rarely two or six, slots for PS / 2 SIMMs. With a few exceptions, slots 0 and 1, 2 and 3 and possibly 4 and 5 must each be equipped with two modules of the same capacity.