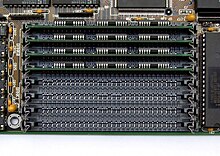 A Simm (short SIMM ) (English for:. Einzelreihiger memory module ) is a design of memory modules , predominantly for use as memory in computers has been developed. SIMMs were built for use with Fast Page Mode DRAM (FPM) and later also Extended Data Output RAM (EDO- RAM ) and are now (2004) only used in devices such as printers or routers . Compared to the individual memory modules that are widely used in home computers and also in 80286 and 80386 systems, SIMMs allow a considerably simplified assembly, less space requirement, higher operational reliability and lower costs. In later 80386 systems, and especially in 80486 systems, SIMMs are widely used. In the PC, they have been replaced by PS / 2 SIMM modules since around 1993 . The transition took place in the late 80486 systems. On motherboards from the transitional period, both four SIMM slots found partly in two or three PS / 2 SIMM slots. The last 80486 motherboards only have two to four PS / 2 SIMM slots.

In contrast to DIMM modules , which, with the exception of SO-DIMMs, are always pushed in perpendicularly to the motherboard , SIMM modules are inserted at a slight angle into the socket without the use of force and fixed by being folded up using a spring latch.