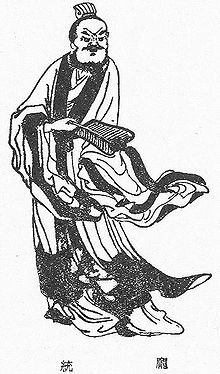 Illustration of a Qing edition of the story of the Three Kingdoms .

Pang Tong ( Chinese  龐統  /  庞统 , Pinyin Páng Tǒng ; * 178 ; † 213 ), majority name Shìyuán ( 士 元 ) was a Chinese advisor to Liu Beis at the time of the Three Kingdoms . His Daoist name was Young Phoenix ( 鳯 雛  /  鳯 雏 , Fèngchù ). The historical novella " History of the Three Realms " describes him as a brilliant tactician and strategist and puts him on a par with Zhuge Liang . The two were suggested to Liu Bei after Sima Hui with the following words: “ Sleeping dragon and young phoenix; with each of them you can settle under heaven. "

Pang Tong came from Xiangyang in the later Kingdom of Wu , where he initially served Sun Quan . At the Battle of Chibi , he pretended to run over to Cao Cao and proposed the "linked ship tactics" that led to Cao Cao's defeat.

After the death of Wu Commander in Chief Zhou Yu , his successor proposed Lu Su Pang Tong as the chief adviser to Sun Quan. However, this rejected him because of his ugly appearance, which angered Pang Tong. When asked how his knowledge compares to that of Zhou Yu, he replied that his knowledge could not be compared with that of Zhou Yu.

Thereupon Pang Tong entered Liu Bei's service, for whom he planned the conquest of Ba Shu (today's Sichuan ). This area, which was then under the governor Liu Zhang , would later be the heart of Liu Bei's Shu empire . However, Pang Tong's proposal to arrest Liu Zhang at a meeting was turned down by Liu Bei in order not to forfeit the sympathy of the population. The story of the Three Kingdoms embellishes this incident in such a way that Wei Yan was supposed to murder Liu Zhang in an alleged sword dance . However, because Liu Bei saw Liu Zhang as a relative, he prevented this act and later even helped Liu Zhang against an attack by the western warlord Zhang Lu .

However, when Liu Zhang stopped sending reinforcements to Liu Bei, Liu Bei decided to drop his care and launched the attack on Liu Zhang through the strategically important Fu Pass. Liu Zhang's generals Yang Huai and Gao Pei were lurking there . They planned an attack on Liu Bei, but were discovered and executed by Pang Tong. Pang Tong himself was ambushed in the Valley of the Fallen Phoenix ( 落 鳯 坡 , Luòfèngpō ) and fell. In the history of the three realms , his death is portrayed dramatically: After Liu Bei had left his horse to replace his own, collapsed horse, Pang Tong rode into the valley. When he learned the name of the place, he shuddered and ordered the retreat, but it was already too late. Liu Zhang sent archers to kill Liu Bei. Since they did not know him, they aimed at Pang Tong and shot him. Liu Bei came into distress at the pass, so Zhuge Liang had to leave Jing Province to shock him. Guan Yu held Jing Province alone until he was defeated by the combined forces of Cao Cao and Sun Quan in 219.