When poplar wood is wood of different species of poplar (genus Populus ) designated as lumber may be used. The poplars are a genus of deciduous deciduous trees . They are the fastest-growing native tree species and mature after 30 to 50 years. Poplar wood mostly comes from cultivated varieties that have grown from different poplar species. Increasingly, poplar wood is not only produced in forest , but also in short rotation plantations .

Around 1% of the wood felled annually in Germany is poplar. Round and sawn timber is primarily made from poplar wood . It is also used as firewood . In Germany about 40% of the poplar wood is processed into chipboard and molded chipboard parts , the rest is used as firewood and the like. a. used for the production of wood pellets and wood chips .

Poplars are the fastest-growing of the native tree species, they are already mature after 30 to 50 years. A poplar stand shows an increase of 10 to 15 solid cubic meters of wood per year and hectare , in the best locations even 20 solid cubic meters. For comparison: Beeches create an increase of 6 to 8 solid meters in good locations. Every year around 350,000 to 400,000 cubic meters of poplar wood are felled in Germany, which corresponds to around 1% of the total amount of wood felled.

Poplar wood is a light, whitish, reddish brown to brownish, diffuse-pored hardwood. The vessels are formed very evenly throughout the year. Early and late wood are similar, the wood is therefore evenly structured. Nevertheless, annual rings are clearly recognizable, as the latewood forms a narrow, denser band to the annual ring borders. In poplars, sapwood and heartwood are clearly separated, with the exception of the trembling poplar , which is counted among the sapwood trees . The heartwood of the black poplar and its hybrids is light brown to light greenish-brown when fresh; it turns slightly red-brown when dry and matches the color of the sapwood. The wood of the quivering poplar is dirty white to yellowish white, the heartwood of the white poplar and gray poplar is dark, reddish yellow to yellowish brown. The sapwood of the species is similar to that of the quivering poplar and is whitish in color.

The wood of the different poplar species has very similar properties and no distinction is usually made between the species. The quivering poplar is an exception due to the lack of core color and the slightly higher density. The wood of the poplar is very soft and, with a bulk density of 400 to 500 kg / m 3 and a wood moisture content of 12 to 15%, is one of the lightest Central European hardwood species and has correspondingly low absolute strength values . In relation to the mass of the wood, however, the strength can keep up with other types of wood. The wood is considered splinter-resistant and, compared to other hardwoods, easy to split. Due to fiber matting on the wood surface and on the friction surfaces, the resistance to wear is also high.

The wood is not very weather-resistant and shows little resistance under water. Fresh, it has a high moisture content. With black and balsam poplars, the humidity of the heartwood is significantly higher than that of the sapwood, with white poplars it is roughly the same, which must be taken into account when drying. It does not tend to tear or warp when it dries, but it does take a long time to reach the moisture content.

The wood is easy to work with with sharp tools, it is easy to saw, mill, peel and cut. Fresh wood is easier to work with than dry wood, as felted sawdust leads to strong friction and heating of the saw blades. Broad-ringed wood can usually be processed less smoothly. It can be glued well and nailed satisfactorily. The surface treatment is problem-free, it can be stained well , but not polished as well .

To this day, poplar wood is used as a preferred wood in prosthetics , alongside obeche , due to its high resilience, good processing options and not least because of its relatively low weight . Pre-fabricated components such as knee components as well as thigh prosthesis blanks are made from poplar. The wooden prosthesis is being replaced more and more by technical plastics. 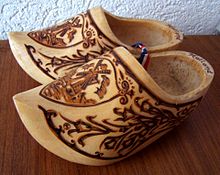 In the Netherlands, wooden shoes were mostly made of poplar wood

The wood of the poplars is mainly used as round , industrial and sawn timber , and considerable amounts are also used for energy (as biogenic fuel, e.g. in heating plants ).

In Germany around 40% of the poplar wood is processed into chipboard and molded chipboard parts. By far the most important consumer of peeled veneers made from poplar, especially the aspen species , is the match industry , which uses it to make matchstocks. In addition, plywood , plywood for curved moldings, chip baskets for fruit and vegetables and gift packaging ( chip boxes ) and, since 1994, proving and baking molds for baked goods are produced from peeled poplar veneer . Also Sliced veneer is made of poplar wood.

Around a quarter of the wood produced in Germany is processed into sawn timber. It is used in the shoe industry, but also for the manufacture of benches and loungers in sauna structures. It is also processed into pallets and boxes.

A special charcoal is made from poplar wood, which is used for drawing accessories and in the chemical industry. The wood is also processed into drawing boards , household appliances, toothpicks and snow shovels. It is also well suited for making fibreboard and making pulp and paper . Furthermore, poplar is processed into wood wool and wood wool panels.

In earlier times poplar wood was used to make wooden clogs or wooden clogs because the wood is cheap, light and insensitive. The famous "Dutch shoes" were carved by hand from the fresh or moist wood. In Emsland and Münsterland , poplar wood is also used for exterior cladding, gable cladding and other planking.

Furthermore, poplar wood is used by Stihl Timbersports as competition wood in ax and saw competitions.

At 19.8 MJ / kg, the calorific value of poplar wood is between that of spruce and beech wood. Due to the low density, the energy yield of the wood in relation to the wood volume (e.g. per ster or per cubic meter ) is lower than that of other firewood.

In addition to willows , poplars, as fast-growing tree species, are the most important tree species for cultivation in short rotation plantations . In poplar wood from plantations, which is harvested after a few years, the ash content is 1.8%, around three times that of spruce wood from the forest.