The 2020 New Zealand general election took place on October 17, 2020. The 120 members of the 53rd House of Representatives were elected .

The House of Representatives is elected according to a mixed-member proportional vote, i.e. a personalized proportional representation similar to the election to the German Bundestag . Each voter has two votes. In each of the 72 constituencies, one member is elected by majority vote.

The remaining 48 list mandates are distributed in such a way that the mandate relationship corresponds to the party vote ratio , whereby only parties are considered that have received more than 5 percent of the valid votes ( threshold clause ) or a constituency mandate . If a party receives more direct mandates than it would be entitled to based on the proportion of the party votes, the parliament is enlarged by overhang mandates .

In the 2017 election , the National Party became the strongest party for the fourth time in a row, but lost slightly. The clear and only winner of the election was the Labor Party , which then managed to lead a government again after a nine-year break. After the election, Labor under Prime Minister Jacinda Ardern formed a coalition government ( Ardern cabinet ) with New Zealand First and the Green Party . The three following years were eventful and Ardern appeared again and again in worldwide press reports.

On March 15, 2019, a right-wing terrorist murdered a total of 51 people and injured another 50, some seriously, in an attack on two mosques in Christchurch . Ardern showed visible concern and empathy with the victims and tried to unite the shocked New Zealand society.

When the surprising volcanic eruption on December 9, 2019 on White Island , which killed 23 people, your guidance was asked again. In 2020, the COVID-19 pandemic also affected New Zealand. The Prime Minister ordered an extensive contact and curfew at an early stage. On June 8, 2020, against the backdrop of rising case numbers worldwide, she announced that there were "no active cases" of COVID-19 in New Zealand and that there had been no COVID-19 positive cases in New Zealand's hospitals for 12 days, so that the restrictions could be partially lifted again. However, the number of cases rose again later.

Although the Ardern government clearly failed to achieve the socio-political goals proclaimed in the 2017 election of abolishing child poverty and reducing homelessness and, to the annoyance of her coalition partner, the New Zealand Green Party, the prime minister was rather conservative in the socio-political area, such as those demanded by the Greens Strictly opposed to the special tax on higher earners, it continued to be very popular with the New Zealand public.

The following parties were represented in the House of Representatives before the election:

Party campaigns throughout 2020 were severely restricted by COVID-19, with the parties barely able to hold events due to the restrictions.

On September 22nd, Jacinda Ardern and Judith Collins met in the first of four planned television debates of the top candidates on Television New Zealand . In the aftermath, experts saw Collins as the winner of the first duel. 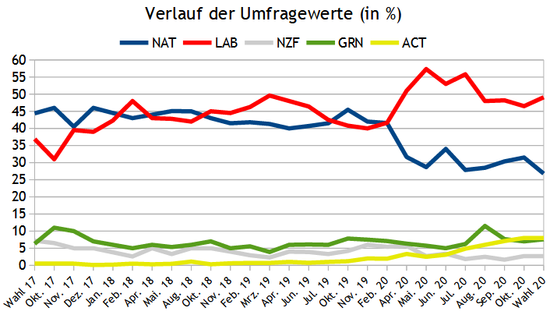 Surveys averaged over monthly survey results, from the 2017 election to the 2020 election 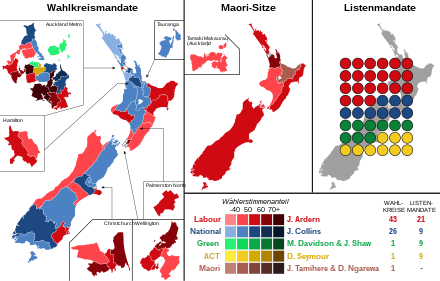