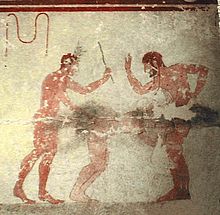 A whip in sadomasochistic area is depending on the type of a narrow straps or rope to a more or less long stem.

Depending on the material and design used, the effect of different models differs considerably. 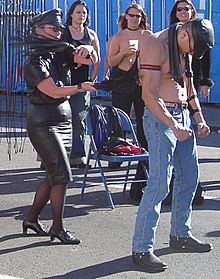 The very wide range of different whip models can sometimes require detailed knowledge from areas as diverse as anatomy or physics that is appropriate to the respective BDSM session in order to make them safe and enjoyable. Practical safety aspects are generally of crucial importance. When using whips, motor skills and anatomical knowledge can mean the difference between a satisfying session, extremely uncomfortable experience, and severe physical damage. In order to recognize a psychological fall of the bottom at an early stage and, if possible, to avoid it or to “catch” it after such a fall, it is important to follow its reactions sensitively and to react accordingly. The warming up of the body affected regions such. B. through the targeted use of floggers to promote better blood circulation and thus reduce the risk of injury is widespread. Without sufficient knowledge and skills, there is a greatly increased risk of injury for both top and bottom, which can range from open wounds to eye, ear and organ injuries to bone fractures.