Monument to the center of Finland

Coat of arms of the former municipality of Piippola 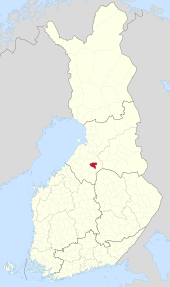 Location of Piippola in Finland

Piippola [ ˈpiːpːɔlɑ ] is a former municipality in the Finnish region of Northern Ostrobothnia . According to a decision taken in 1958 by the illustrated Suomen Kuvalehti , Piippola is the geographic center of the country.

The community has existed since 1885 and includes the villages of Lamu, Leskelä and Kangaskylä in addition to the parish of Piippola. Since 1945 there has been a partnership with Leksand in Sweden.

Besides a monument that marks the center of the country, the wooden village church from 1770 and the local history museum, which is housed in a log cabin from the 18th century, of the former parish are worth seeing.