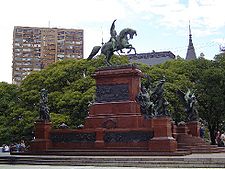 Monument to José de San Martín, who gave the plaza its name

The Plaza General San Martín is a public green space in the Argentine capital Buenos Aires . The plaza is located in the Retiro district . It is bordered by Avenida Santa Fe , streets Esmeralda, Arenales, Maipú, Avenida del Libertador , Calle Florida and Calle San Martín. To the north are the Plaza Fuerza Aérea Argentina, the Plaza del Carril and the Plaza Canada.

Several colonial governors had their official residences in what is now Plaza San Martín. In 1713 the land was sold to the South Sea Company , where they ran their slave business in the former governor's residence. A fort and a bullring were later built on the square. In 1807 the plaza was the site of the British defeat in their attempted invasion , whereupon the plaza became known as the Field of Glory . In 1810, after the city was detached from the Spanish crown, barracks were built in the plaza for General San Martín's mounted grenadiers. In 1813 the slave trade in the United Provinces of the Río de la Plata was abolished and the slave quarters demolished. In 1824 San Martín went into exile in Europe, where he also died in 1850, but after his death his importance for Argentine history was recognized and the French sculptor Louis-Joseph Daumas was commissioned in 1862 to create an equestrian statue in honor of San Martín. In 1878, on his hundredth birthday, the Plaza General San Martín was given its current name.

In 1883, by order of the mayor Torcuato de Alvear, the fort, the arena and other buildings were demolished and the plaza planted. In 1889, Carlos Thays gave the square its present form. Around 1900 the area was a popular place to live for the upper class in Buenos Aires and so magnificent buildings were built around it, including a. the Palacio San Martín (formerly Palacio Anchorena), the Palacio Paz and the Palacio Haedo.

In 1936 the son of Thays, Carlos León Thays, built an esplanade around the monument to San Martín, around the same time the Edificio Kavanagh on the east side of the square was completed. Although some of the older buildings in the area have been replaced by skyscrapers, including the Pirelli building from 1975, the square has not lost any of its original charm.

To the east of the square is the Monumento a los caídos en Malvinas , which opened in 1990, in honor of the fallen soldiers of the Falklands War .