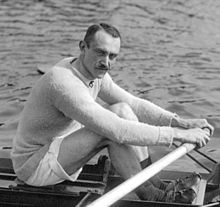 Polydore Veirman rowed for the Koninklijke Roeivereniging Club Gent . This club placed eighth several times , who represented Belgium at the European Championships . From 1897 to 1910 the Belgian eight won the title at the European championships twelve times, the French boat only won in 1905 and 1909. Polydore Veirman was in the victorious boat in 1901 , 1907 and 1908 . At the Summer Olympics in London in 1908 , two boats competed against each other in the finals of the four boat classes. The Ghent eighth with Polydore Veirman was the only foreign boat to reach a final and was there defeated by the Leander Club crew .

Veirman had, in addition to his three successes in eighth at the European Championships in 1908 and 1909 with the four with helmsman, finished second before switching to the one . At the European Championships in 1911 he took second place behind the Italian Giuseppe Sinigaglia , in 1912 Veirman won ahead of Sinigaglia. At the Olympic Games in Stockholm in 1912 , fourteen rowers competed in a single, Sinigaglia was not at the start. As four years before, only two boats made it to the finals in each boat class, Veirman reached the finals, but lost to the British William Kinnear .