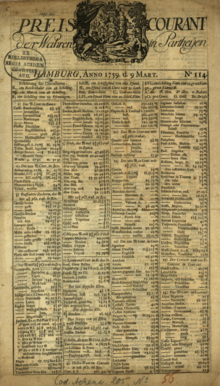 In the early modern period , price bidders were an important information medium for merchants who were involved in long-distance trading. Its purpose was to inform itself, but above all foreign business partners, about the price of certain commodities on the local market. In addition to official, d. H. from an institution such as a CommerzdeputationThere were also private price labels issued by a trading house. While the official price lists were printed in full and appeared in a fixed cycle (often weekly), the private ones mostly consisted of a form in which the current prices were entered by hand. In addition to simply listing the prices of goods, price curators can also contain information on money and exchange rates as well as insurance premiums, including handwritten information on the weather.

The forerunners of the printed price lists were handwritten compilations ("listini dei prezzi") that were sent to their respective headquarters by local agents of Italian trading houses. They were used for coordination between the individual factories of a company and in this form go back to the 14th century .

Official price bidders serving public information first appeared in Europe in the 16th century and, in their early form, recorded bid prices as well as commodity prices. The first goods price lists of this kind have come down to us from Venice and the major northern European trading centers of Frankfurt am Main , Amsterdam and Hamburg . In the course of the 18th century, price tags were often created in the local language, but they could also be printed in the language of the respective trading partner (for example in Dutch in Riga or Hamburg).

Although the price chains of large trading centers in the 17th and 18th centuries converged in shape, there were differences in the details of both the presentation of the information and its procurement. In the case of the London price curator, at the end of a trading day, the publisher sent his employees to individual traders who traded in certain goods or certain places in order to collect the desired prices. In other trading centers such as Amsterdam and Hamburg, individual commodity brokers were tasked with obtaining information. The information gathered in this way was then published on the price label, which consisted of a single sheet of paper, with a label measuring between 5 cm × 8 cm (Cádiz) and 14 cm × 46 cm (Amsterdam) initially printed on one side and later on both sides. The reference to the client or the sources of information (for example in the New London Price Current from the 18th century: "with the Assistance of many principal brokers and factors") as well as the name of the publisher should confirm the seriousness of the information contained underline. The goods were arranged alphabetically in the case of younger price traders (e.g. New London Price Current ). Older price curators ( e.g. Hamburger Preiscourant der Wahren in Partheyen ) grouped the goods according to the currencies in which they were traditionally traded.

Price curators are among the most important historical sources for the European price history of the early modern period . The evaluation of the longest possible price series allows conclusions to be drawn about economic cycles; By comparing price curves from different marketplaces, trade margins can be calculated, taking transport costs into account.

Larger collections of institutions and price curators published by companies: