Eppelein von Gailingen , real name Apollonius von Gailingen (* around 1320 at Röllinghausen Castle in Illesheim near Bad Windsheim; † May 15, 1381 in Neumarkt in der Oberpfalz ), also known as Eckelein Geyling, Ekkelin Gayling or Eckelein Gailing, was a Franconian Robber baron who made the trade routes around Nuremberg unsafe. His year of birth is imprecise, sources indicate a range from 1300 to 1330. 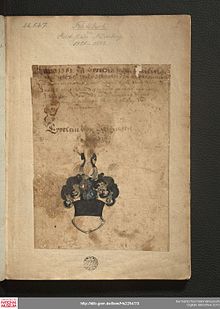 Memorial of the execution site in Neumarkt in the Upper Palatinate

The knight family of the Geylinge had received smaller fiefdoms from the Counts of Hohenlohe . It was economically dependent on in-kind payments from the farmers who worked poor land. Trade and industry flourished in the surrounding imperial cities. As rich patricians, the Nuremberg residents were envied by Eppelein. The knight was feuding with the city and its Hohenzollern burgrave . He could not finance the expensive equipment of a professional warrior and his staff with his own income alone.

Eppelein's home was supposedly Franconian Switzerland . His castle Dramaus at Draynmeusel (now Train Meusel ) that will Wiesent valley in Muggendorf have dominated. The existence of this castle is still in dispute today. In fact, a castle stables at Trainmeusel were first mentioned in a document around 1420.

In the 1360s, Eppelein began raiding commercial wagons to and from the imperial city. 1369 was by the Tribunal imperial ban imposed on him; He also lost his co-ownership of Wald Castle near Gunzenhausen and important goods in Nuremberg. In a feud between the Count of Hohenlohe and the Nuremberg Burgrave in the 1370s, Eppelein fought on the side of his liege lord .

In 1380 Eppelein had a documented farm in Steinbach (Rothenburg ob der Tauber) .

By mid-1375 at the latest, the part of the fortress forest of Eppelein Geiling must have been destroyed, because on August 28, 1375 Emperor Charles IV lent this part of the castle to Friedrich V burgrave of Nuremberg. Eppelein escaped his adversaries, but was betrayed shortly afterwards and captured in Forchheim . In Nuremberg he was sentenced to death on the gallows. Legend has it that he jumped his horse over the wall of the Nuremberg moat and escaped.

The people of Nuremberg have been mocked by the vernacular because of their mishap with the remark "The Nuremberg don't hang anyone - they would have him before!"

Because of the robber barons of the von Bernheim brothers and the Eckelein Geyling, Emperor Karl IV agreed in 1376 at the request of the city of Rothenburg ob der Tauber to have his castle destroyed and the Eppelein property confiscated . After an arrangement by the Hohenlohe and Hohenzollern houses, Eppelein finally became a pawn sacrifice in the game of the mightier. They settled in their dispute in 1377 with no claims for compensation. Eppelein became destitute and was therefore forced to raid. Eppelein found shelter in Cronheim, among other places . In the case files it is noted: “Item to Cronheim you were about to come and Hensel zu Cronheim took you home. Item the pfaff in front of the same purg also held her, he is the Bernheimer veter… “This suggests that Eppelein, his son-in-law Hermann von Bernheim and his brother stayed with their cousin, the Cronheimer pastor, in the mansion of the old allodium Cronheim , which served as a parsonage lived, were housed.

His looting and raids ended in 1381. In the village of Postbauer , the robber baron celebrated a carousing party with his cronies in the Black Cross inn and was denounced to the authorities. A team of mercenaries set up by Nuremberg for his search overpowered the robber barons and imprisoned them in the fortress of Thann Castle . A few days later Eppelein was tied to his bike in Neumarkt in the Upper Palatinate and tortured to death. The same judgment was passed against his son-in-law Hermann von Bernheim and his brother Dietrich. The heads of four other servants who had accompanied him on raids were cut off. The capture and execution of the mugger cost almost 1,000 guilders, which, however, was not symbolically paid for by the city of Nuremberg in the form of chocolate coins until 1998 on the occasion of the state horticultural show in Neumarkt.

The history of Eppelein is sparse. The knight Eckelein Geyling was stylized into a kind of Frankish Robin Hood in the 19th century in the Romantic era . He was a victim of the circumstances in the late Middle Ages, when the knight armies lost their importance. After the end of the Crusades, the knighthood began to decline and cities began to flourish. Economic hardship probably forced Eckelein to commit crime. He must have been a funny as well as daring, brutal and loveliness not averse person, who was also able to capture his surroundings for himself and his atrocities of later life.

The jump over the Nuremberg castle wall was impressed on the consciousness of contemporaries as an exciting event and legends soon grew up around it. A folk song about him was written around 1500. The Nuremberg Castle , on the other hand, was not so solidly fortified at the time of the escape, because fifty years after Eppelein's jump into the moat, the fortification was destroyed and rebuilt. The traces of Eppelein's horse shown today are carefully chiseled into the wall parapet at the Kleiner Freiung. Later generations contributed to the creation of the legendary figure of Eppelein von Gailingen. Stories spun on also provided material for poems.

The story was filmed in 2008 under the name Ekklins Knecht based on the script by Peter Klewitz . Reinhard Kungel directed it. Eppelein's helper Hans von Cronheim, played by Klaus Jugl, who temporarily gave him shelter in his manor in Cronheim , is portrayed as a traitor to Eppelein, which probably does not reflect the real story correctly.

In honor of Eppelein, the Franconian Alb Association operates a supra-regional hiking trail of the same name . The path, which is around 90 kilometers long and marked with a red cross on a white background, leads from Erlangen-Buckenhof to Neumarkt in der Oberpfalz.

The British singer and songwriter Colin Wilkie and his wife Shirley Hart took up the story of Eppelein von Gailingen in the song Eppelein Von Gallingen on their album Morning & Outside The City .