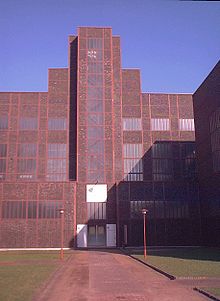 The Red Dot Design Award (from 1955 to 2000: Design Innovations ) is a design competition advertised by Red Dot GmbH & Co. KG and paid for by participants, in which the Red Dot , a red point, is awarded. According to the company, this stands for good design quality and is given in three different awards to products, brands, communication design work and prototypes.

The submissions for the Red Dot Design Award are evaluated and awarded by a jury consisting of designers, professors and journalists from various fields. The award-winning projects are presented in international exhibitions, for example in the Red Dot Design Museum Essen , online on the Red Dot website and in the yearbooks.

The Design Innovations award, first awarded in 1955, was renamed the Red Dot Award: Product Design in 2000 . A qualitative distinction is made between the awards “Red Dot: Best of the Best”, “Red Dot” and “Honorable Mention”.

These are awarded annually in June or July in the Aalto Theater in Essen . The regularly changing members of the jury include design experts such as Vivian Wai-kwan Cheng, Hideshi Hamaguchi , Simon Husslein, Adriana Monk and Dick Spierenburg. In 2020, more than 6,500 designs from 60 nations were submitted, of which 1,644 products received the Red Dot for high design quality. In 2019, registration for the competition cost between € 270 and € 430; in the case of a Red Dot award, a further € 3900 was due for mention in the yearbook, on the website and for inclusion in the exhibition. The Red Dot: Best of the Best was awarded 76 times in 2020.

The award has also been given for communication design since 1993 . The award ceremony moved from Essen to Berlin in 2011. Since 2019, the competition has offered brands the opportunity to present themselves holistically. For example, Deutsche Telekom, Grohe and HappyGoal were honored as the best brands in their industry.

The Red Dot Award: Design Concept competition, developed together with Ken Koo, has existed since 2005 and is dedicated to concepts and prototypes. This is organized from Singapore.

Both designers and manufacturers can register work for the fee-based Red Dot Award: Product Design for a fee of 300 to 510 euros. The award-winning participants, who are then allowed to use the Red Dot on their products, incur additional costs of currently 3950 euros for the mandatory entry in the yearbook, the use of the Red Dot label and the presentation in the exhibition. The only monetary prize is the Red Dot: Junior Prize, which is endowed with 10,000 euros (minus the costs for registration and the follow-up costs) and is awarded as part of the Red Dot Award: Brands & Communication Design.

In 2013, Reinhard Brembeck criticized the Süddeutsche Zeitung for taking submission fees for participation in the Red Dot Design Award and for even more money for "lavish books and parties" if they won.

Achim Schaffrinna from Blog Design Tagebuch criticized the awarding practice in 2012. In 2011, around every fifth work submitted received an award in the field of product design, in the field of communication design it was around every tenth work. With the Red Dot: Best of the Best award, around one to two percent of the work would be recognized annually. In view of such an “award glut of up to 830 red dots per year and per division”, Schaffrinna asked herself whether “the award could actually function as a seal of quality”. Behind the Red Dot Award is a company that “thinks and acts economically. More submissions mean more sales and more profit ”. That is "a design award as a business model".

Alan Posener criticized the 2020 award in the world as being irrelevant for consumers, since about every fifth product submitted receives an award and the award is therefore more of a "business idea" than a serious award.

Publication of the award winners

The winners will be published as a book and online.

All previous winners were available online in 2017. In the meantime, only the current award winners are presented to the public and older vintages up to 2011 can only be viewed via paid access. Either a 24-hour ticket can be purchased for this, or an annual membership can be purchased for 1,000 euros net.