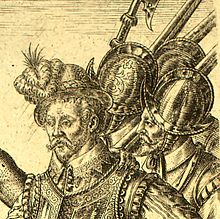 Laudonnière was born in Poitou, became a Huguenot and in 1562 accompanied Jean Ribault on his first French expedition to Florida. In 1564, Laudonnière came again to Florida as the commander of a second expedition and built Fort Caroline on the south bank of the St. Johns River in the valley he called Vallé de Laudonnière in July 1564 . The base was attacked by Indians and the settlers were about to mutiny when Sir John Hawkins stopped by selling Laudonnière groceries and a ship (1565). Shortly afterwards Ribault also came to Florida; he brought with him the order for Laudonnière to return to France to defend himself against various accusations. Before Laudonnière could leave, the settlement was attacked and destroyed by the Spaniards under Pedro Menéndez de Avilés . Laudonnière was one of the few who escaped the bloodbath to reach France in 1566. His report "Histoire notable de la Floride" appeared in 1586.