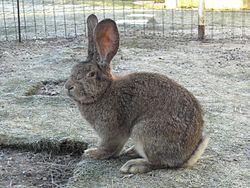 The giant rabbits are a group of particularly large rabbit breeds . The group includes the following breeds in Germany :

For the giant rabbit, the ZDRK standard now has a maximum limit for the weight of the German giants. This limit is 11.8 kg.

The giant rabbit comes from the Ghent area in Belgian Flanders , which was a stronghold of rabbit breeding in the 19th century. According to this origin, they were called Belgian or Flemish giants when they were imported around 1880 to 1890. There is no further information about their origin; presumably the breed developed through selection. The first giant rabbits imported to Germany were much lighter than today (around 4–5 kg), that is, of the size range of today's medium-sized breeds. In contrast to today's giant rabbits, the animals of that time showed white markings on the chest, forelegs and forehead, which were also required by the Belgian standard at the time. The giant rabbit was shown at the first rabbit exhibition in Chemnitz in 1893 ; the standard at that time required a weight of 4.5 kg. In Germany, the imported giant rabbits continued to be reared into even larger animals and monochrome fur. The weight of the giant rabbits rose to 8–9 kg within twenty years, the size that is still common today in the animals shown at exhibitions. After the long and heavy animals were bred haphazardly in the first decades, a balanced, strong body is required today. In the case of the German giant, various single-colored shades are recognized today; the gray (wild-colored) is the most common. For a long time the giants in the Association of German Rabbit Breeders (BDK) were called "Belgian giants" (Standard 1948). The evaluation regulations for pedigree rabbits of socialist countries led the "German giants" as "giant rabbits", while another breed "Hungarian giants" with a lower minimum weight of 5.5 kg, only black-boar-colored, and "Moravian giants", minimum weight 5.0 kg , only leads in light blue-gray.

The white color of the giant rabbit, which was created by crossing the Belgian or German giants with albino animals, was shown for the first time at exhibitions in 1904. The white giant is pure white with red eyes. Since the body mass of these animals is slightly less than that of the other colors, they were separated from the German giant as a separate breed. Because of the large white rabbit fur , which was very popular at the time , and which were also in great demand for imitation of noble fur , the white giants quickly found widespread use. In addition to the "white giants", the evaluation regulations for breed rabbits of socialist countries lead another breed "Hungarian whites" with a lower minimum weight of 5.0 kg and a maximum weight of 6.0 kg. Recently there has also been a white color with blue eyes in Switzerland. Since 2012, the white giants are no longer considered an independent race and are now part of the German giants.

The giant checks emerged around 1900, especially in the Rhineland, from Belgian land rabbits, which were already drawn in a similar way and were shown in the crossbreed animal class at shows as early as 1897. In its further history, this breed was renamed the German Land Rabbit. These were large rabbits, the drawing of which corresponded to today's giant check, but without the snout drawing ( butterfly ) and the cheek points of today's giant check.

In the further course of the breeding, emphasis was placed on the presence of the snout markings, the type of "Papillon" or in Germany of the German giant check emerged above all in southern France; by crossing giant rabbits, the size range was expanded to the current level. In parallel there were the German land rabbits until the 1960s (Standard 1932, 1948).

The ideal drawing image of today's giant chicks consists of the head drawing with the butterfly-shaped drawing of the snout, the rim of the eyes and the cheek patch on both sides. The hull drawing includes the eel line, which starts from the neck and continues evenly about 3–4 cm wide along the spine to the top of the flower, as well as the 6–8, approx. 3 cm wide side spots on the flanks, which should be as separate as possible. The giant checkers conforming to the standard are split-sized; Mating with one another leads to 25% monochrome animals, 50% type chicks and 25% so-called light chicks. These Hellschecken usually only show an incomplete eel line and no side markings and are usually not viable. This inheritance is caused by the factor for Punktscheckung (German symbol k / K, English en / En), which is linked to a so-called lethal factor, which means that Hellschecke have a significantly reduced viability. For reasons of animal welfare, it is therefore recommended to prefer pairings between single-colored animals and type chicks in order to avoid the appearance of pure-bred pale chicks. Giant checkers are recognized in the colors black, blue and havana. In 2011 the giant check was voted Rabbit Breed of the Year by the Central Association of German Breed Rabbit Breeders .

The German ram , which is also one of the large breeds, differs from the giant rabbits in its drooping ears and blocky body shape.

In Belgium , the Netherlands and Great Britain the giant rabbits with the original name Flemish Giants are bred; the standard requirements hardly differ from those in Germany. The British loft is a little lighter than the animals from Belgium, Germany and the Netherlands. In Great Britain, the British Giant, which comes from separate imports of Flemish giants from the USA , is also bred.

The dot piebald , known from the German giant chicks, is also shown in the same form by the Rhenish piebald , small piebald and dwarf piebald .