The ram rabbits are a group of breeds of rabbits of various sizes.

Characteristics of the ram rabbit

A common feature of the ram rabbit is the ears that hang down on the sides of the head. The ram rabbits get their German name from the typical arched shape of the head (Ramsnase), which resembles the head shape of a male sheep in profile . The slightly drawn-up, cartilaginous base of the ears creates a small bulge on the head, the so-called crown. The ears should hang freely with the opening inwards (horseshoe hangings), the English ram is an exception. The body is usually short and stocky, but the English Aries long and slender. Young Aries rabbits initially have erect ears, only in the course of growth, from the 4th to 6th week of life or later their ears tip over.

Aries rabbits are generally considered to be somewhat calmer and less scared. They become more trusting, which is why the small specimens are often kept in the apartment.

History of the ram rabbit

Domestic rabbits with one or two drooping ears have been known for several hundred years and are depicted in historical illustrations. In 1858 Darwin describes half- and completely lop-eared rabbits in his work "The variation of animals and plants under domestication". The appearance of lop ears as a domestication feature is also known from domestic sheep , domestic goats , domestic pigs and domestic dogs . Mating of lop-eared animals and appropriate selection led to this trait being hereditary. After Germany , the first French Lop-Eared Rabbit came probably after the Franco-German War , in which many soldiers the rabbit breeding in France met. According to other sources, it was imported as early as 1869, shortly before the Franco-Prussian War. As was common in the early days of rabbit breeding, the new breeds were given "exotic" names, and the first ram rabbits were also known as "Patagonian" or "Andalusian" rabbits. While in Germany, as in France, more emphasis was placed on the economy of the animals and the German ram rabbit was bred out of the original, the English ram rabbit arose in England , where the breeding goal was designed for almost grotesquely long and wide ears. Both the French (German) Aries and the English Aries were among the first rabbit breeds to be bred in Germany and can be seen very often on historical posters and club badges.

Later other rams were bred, for example the Meißner ram around 1900, a medium-sized rabbit with silver-coated fur. 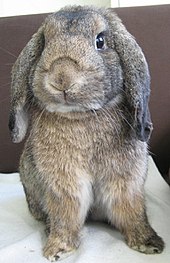 The small aries have been bred by Erhard Diener from Bischmisheim near Saarbrücken since 1954 . They were shown for the first time at an exhibition in 1957. The inclusion as a breed in the standard took place in 1968. Since the recognition of the Central Association of German Rabbit Breeders with the association of allotment gardeners, settlers and small animal breeders responsible for the common standard in the GDR was not agreed, this recognition was valid not for the GDR. Here Karl Becker from Stadtlengsfeld , who also bred the Rhön rabbits, showed German small rams as a new breed for the first time in 1977. The recognition took place in 1980 with the "Evaluation Regulations for Breed Rabbits in Socialist Countries".

Aries dwarves have been specifically bred by Adrian de Cock from Tilburg (Netherlands) since 1952. He used colored dwarves and French rams for his experiments . Through kinship breeding and selection, as well as crossing Madagascar-colored English rams and colored dwarves, he achieved the rams dwarves in 12 years of breeding, which were shown for the first time in Den Bosch in 1964 and recognized as a breed in the Netherlands. In the same year it was imported to Germany, where the breed did not attract much attention due to the simultaneous breeding of small rams. The ram dwarfs were recognized as a breed in Germany in 1973.

The German Aries is the direct development of the Aries rabbits imported from France. It is a large breed of rabbits (normal weight over 5.5 kg; 9.0 kg maximum weight), which is recognized in various colors. The most popular and most cultivated color is wild / rabbit gray (w./hsgr.). The German Aries looks rather squat. His head appears massive and broad due to the pronounced cheeks. The ears of the German Aries are wide and droop, opening to the body, half over the eyes. They reach a span of 38 to 45 cm. 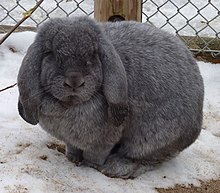 The Meissen ram was first presented in 1900. It was obtained by crossing English and French rams with gray silver rabbits by the breeders Leo Reck and Emil Neupold in Meißen . His typical breed characteristic is the combination of the ram type with the color of the silver rabbit. The Meißner Widder is a medium-sized rabbit weighing between 4.50 and 5.5 kg. All colors of the Meissner Aries are recognized that also occur in the small silver rabbit. According to statistics from the Central Association of German Racial Rabbit Breeders , the proportion of Meißner rams is 0.3% of all rabbits bred. (Average of all races 1.3%). The black and silver color makes up 75% and the blue and silver 18%. The Society for the Conservation of Old and Endangered Domestic Animal Breeds put the Meissner ram on the Red List of Endangered Livestock Breeds as threatened with extinction .

The English ram differs significantly in type from the other ram rabbits, while these are rather blocky and strong, the English ram is a rather slender animal. The ears are particularly long and wide by selection, in earlier times spans of over 70 cm and widths of 16 cm were obtained. The animals were kept in protected, sometimes also warmed rooms to encourage the growth of their ears. Today the span is limited to 58–60 cm and the width to 12–15 cm. The ears are worn hanging down on the head with the sound opening facing forward. Different shades of color are also permitted for the English ram. After being one of the most popular rabbit breeds around 1900, the English ram has become very rare today.

The German small rams resemble the German rams except for their smaller size. In contrast to the large regular breed, the small rams only weigh about 3.00 - 4.00 kg. According to the ZDRK standard, the ideal weight should be 3.00 - 3.5 kg. For the colors, the same applies to the German Aries.

The body shape of a small ram should be short and stocky with a nice back line and a wide, rounded pelvis. A typey ram's head with Ram's nose and horseshoe-shaped hangings and a well-defined crown characterize the breed. The ear length (wingspan) is 30–36 cm.

The rammer is usually more powerfully built than the rabbit and shows all features in a very pronounced form, whereas the rabbit normally shows a narrower head and more delicate build. 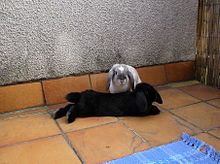 The dwarf rams, bred in the Netherlands around the same time as the German rams, are the smallest ram breed. The normal weight is 1.4 to 1.9 kg, with a maximum weight of 2 kg. Dwarf rams are known in a variety of colors , similar to the color dwarfs . In contrast to the colored dwarfs and the ermine rabbit, they do not have the dwarf factor .

Endangered livestock breed of the year in Germany