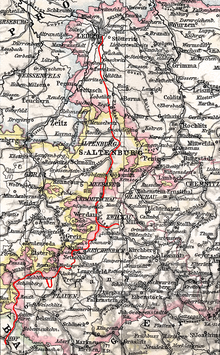 The Sächsisch-Bayerische Eisenbahn-Compagnie was a railway company in Saxony . It was founded in 1841 to build and operate the long-distance railway line Leipzig – Hof with a branch to Zwickau. The company was nationalized in 1847 before the completion of its routes due to financial problems.

Historical view of the Bavarian train station in Leipzig

Based on the model of the successful Leipzig-Dresden Railway Company , the Sächsisch-Baiersche Railway Company was founded in Leipzig on June 12, 1841 , as a private company that planned and financed the construction of the line. As with the Magdeburg – Leipzig line, this was a cross-border line that touched the Kingdom of Saxony as well as the Duchy of Saxony-Altenburg and the Kingdom of Bavaria .

The commissioning as a private railway line took place in several stages:

In addition, on September 18, 1845, a branch from Werdau to Zwickau was opened .

For the last section between Reichenbach and Hof, several traffic-related problems had to be solved that the private railway company could not finance. Crossing the two deep valley cuts of the Göltzsch and the Weisse Elster was particularly problematic . With the construction of two large brick bridges, the Göltzschtalbrücke and the Elstertalbrücke , new technical territory had to be broken. The two bridges were twice as expensive as originally planned. In addition, Hermann Lattermann made claims for compensation for parts of the mine field that were confiscated by the railway construction. A necessary capital increase by the railway company in July 1846 to continue building the line from Reichenbach and to further finance the large bridges in the Vogtland did not materialize, only around 10% of the estimated amount was subscribed to shares.

On September 21, 1846, the Sächsisch-Baiersche Eisenbahn-Compagnie had to admit that they could no longer finance the construction work and asked the Kingdom of Saxony for help. After long, tough negotiations between all the states involved in the construction, the Kingdom of Saxony took over the railway company on April 1, 1847 and operated it from then on as the Saxon-Bavarian State Railway . Now the last sections of the route could also be realized. On July 15, 1851, it went fully into operation.