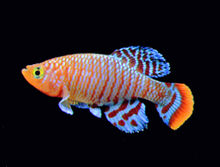 As season fish or annuelle fish is called killifish , the waters inhabit, which dry out periodically.

Your eggs go through so-called diapause . This means a standstill in the development of the egg. The first diapause begins after the first division steps in the egg. It is triggered by a lack of oxygen in the vicinity of the eggs (these are deposited in the mud of the substrate) and lasts until the home waters of these fish dry out. If the eggs are now dry, air and thus oxygen can again reach the eggs and development continues. The fully developed embryo then remains in another diapause, which is ended by the onset of rain at the end of the dry season . These pauses in the slides can delay the development of the eggs by weeks or even months.

The young animals then colonize their traditional habitats again. However, they only have “one season” for their lives. The animals have to be sexually mature within a few months in order to ensure the continued existence of their species before the next dry season . The adaptation to these difficult habitats is so perfect that the animals maintain their fast pace of life even in the aquarium : seasonal fish grow extremely quickly, can be sexually mature after eight to nine weeks and after a year, or at the latest one and a half years, the animals are usually old and die .

In Africa these seasonal fish are represented by the genus Nothobranchius , in South America the sailfish ( Cynolebias ) and the barnacles (Pterolebias) live . Due to more recent scientific research, these two genres have been further subdivided.

If an aquarist wants to reproduce such fish, he must provide the fish with unfertilized peat, either directly as a substrate or in a plastic bucket. For fish that spawn deep in the ground (e.g. Cynolebias ), the peat layer must be at least as thick as the fish are long. After approx. 2 weeks, the peat is removed from the aquarium and dried to a low level of residual moisture. The treated peat base is kept in a plastic bag for the duration of the species-specific "dry season". Without this dry season, the eggs will not develop. After 2–6 months, the peat is placed in a separate aquarium, where the fry hatch.