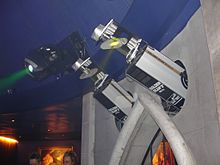 A scanner in lighting technology is a multifunctional headlight whose light beam is deflected by an electromechanically movable mirror. A so-called "effect unit" is installed between the light source and the light outlet opening, which can change the properties of the light beam, for example in terms of color and shape. All functions can be electronically remote controlled.

Mostly gas discharge lamps (HMI, HTI, MSR, HSR, MSD etc.) are used, more rarely also halogen lamps , in the power range from 150 W to 4000 W. The advantage of gas discharge lamps is the higher color temperature and the higher light output compared to halogen lamps. Because gas discharge lamps cannot be dimmed , the brightness is controlled mechanically by means of locking plates (“shutters”) which are located in front of the light outlet and which are moved into the beam path. Lately scanners with LED technology have also been used. These devices either use an LED matrix to generate " gobos " and various color effects (no gobo and color wheel), or they use a single high power LED and then also work with gobo and color wheel.

Modern scanner with 60W LED from the manufacturer Cameo

Several dichroic color filters either sit firmly on a rotating wheel or, if arranged one behind the other, cause a subtractive color mixture with which in principle any color can be generated according to the CMYK color model . Some scanners also have a conversion filter that adjusts the color temperature of the gas discharge lamps to that of halogen lamps in order to enable both sources to be operated in parallel without optical differences, or simply to produce a warmer color tone. LED devices can use additive color mixing and reproduce the RGB color space .

Scanners usually have built-in gobos . The simplest variant is made of metal and is used to project patterns such as rings or the like. Like the color filters, these gobos are located on a wheel and can be exchanged for different patterns. Another variant are glass gobos, which are often made of colored glass in conjunction with incorporated patterns. In many scanners this filter can be rotated around its center point, so that rotating patterns are created on the projection surface. If there are several gobo wheels, new patterns can be created by combining them.

There are two different systems for bundling the light emitted by the lamps:

Some devices have a prism which multiplies the previously created projection, so that when a gobo is used, the projection pattern is created not just once, but several times depending on the prism used. The prism can also be designed to be rotatable.

An iris diaphragm , if present, enables the beam angle to be controlled. This allows the light cone to be enlarged or reduced. A pulsating light cone can also be used as an effect.

Depending on the model, the lens can be adjusted (focused) using the control signal or by hand so that the projections of the patterns are sharp.

A shutter enables the light path to be blocked. This is necessary because incandescent halogen lamps and especially high-pressure gas discharge lamps cannot be switched on and off quickly. In addition, a flash effect ( strobe ) can be generated with a fast shutter .

Differentiation from other moving lights

Moving lights can be divided into two classes:

With mirror-controlled scanners, the projection hits a mirror surface, which is moved sideways and tilted with the help of two motors so that the light beam is deflected onto the projection surface. Although this has the advantage that only a light mirror needs to be moved and the projection can therefore be quickly realigned, the range of tilt and rotation is limited. For these reasons, scanners are preferred for disco use or for certain stage effects, but are not suitable when it comes to reaching every point on a stage.

Head- moving spotlights, also known as moving heads , move the light source including all filters. Due to their considerable weight, their movements are slower than mirror-controlled scanners, but allow projecting onto almost every surrounding point in space. They are therefore particularly suitable for use on the stage. The basic rotations of a moving head are usually limited to 540 °, while the inclination is often 270 °.

The rotary scanners are the hybrids between the scanners and the "moving heads". The projection is tilted by a mirror, the rotation is effected by moving the entire base unit, similar to the moving head. In this way, the entire room below or above (depending on the mounting) of the scanner can be illuminated. The rotary motors used are not limited to 540 ° like most moving heads, but can rotate without restriction. Some models rotate extremely fast at 120 rpm.

So-called TM scanners form a special family. Two mirrors are moved against each other at an angle on two different axes and can project in almost all 360 ° directions.

A scanner is usually controlled via DMX . There are scanners with over 20 functions, so that a corresponding number of DMX channels can be occupied by a single device. There is a wealth of special consoles that have been specially developed for controlling scanners, as the scope of services is considerably greater than with static lighting.

Since the light mirror usually moves quickly, most models are equipped with one channel for pan and one channel for tilt movements. The desire for more precise, slow mirror movements also prompted manufacturers to build models with 16-bit resolution (two channels each). These are often larger models that should be able to drive smoothly over long distances.

In the lighting technology scanners and moving heads are firmly established. Often the classic, conventional spotlights are only used for the basic lighting of a stage. Discos, which in particular have newer music genres in their program, are largely equipped with scanners, and the work of a light jockey (LJ) is becoming more and more attractive.