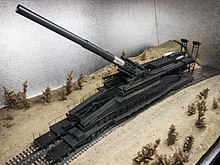 Model of the Dora gun in a two-pronged shooting curve

Firing curve is a term used in connection with a railway gun. Because such a gun is relatively large and heavy, the horizontal rotatability of the gun barrel i. d. Usually waived. Since it can be driven on a track anyway, it is driven in a track curve (firing curve ) to the point where the direction of travel coincides with the direction of the gun. The shooting curve can be part of an existing track system or a track specially built for this purpose.

A firing curve was required for heavy railway guns such as the K 12 or K 5 , but also as a special form for the largest cannons ever built, the Dora and Schwerer Gustav - which were not railway guns but only had a carriage that ran on rails. Due to its enormous weight, its carriage was built on two parallel tracks, but the gun itself was not designed as a railway gun, but only loadable by rail in several trains. To move Dora / Gustav on the shooting curve, three diesel-electric double D 311 locomotives were built, each with an output of 940  hp (691  kW ).

Floor plan of a turntable for a 38 cm rail gun

As an alternative to a firing curve, small turntables built into the access track were built with track stubs on both sides, which allowed one of the gun's bogies to be moved sideways . This solution was only possible for guns whose recoil damping was sufficient and which therefore did not have to give way on the track.

Another alternative was the Vögele swivel bed, which allowed 360 ° positioning. The facility built by Krupp was so dimensioned in diameter that the gun could be placed on it in its entire length. The pivot bed had a third rail between the running rails for the positioning drive. The bed was equipped with hydraulic buffers on both heads to absorb the recoil of the gun.