This 27.4 cm railway gun was captured by US troops in Thuringia near Rentwertshausen in 1945 .

An American rail gun is being loaded.

A rail gun or railgun is a mobile gun , which on a railway - carriage is mounted.

The special guns Schwerer Gustav and Dora (80 cm) were officially referred to as railway guns, although they could not be used "mobile" on the railway network , but required specially laid short tracks for assembly and dismantling and as a shooting curve .

Railway guns were usually large-caliber cannons with long ranges. They should be able to destroy massive fortifications and fight bunkers , another field of application was the bombardment of strategic targets or deployments behind the enemy front line that were beyond the range of the normal field artillery. The barrels of the first railway guns were originally ship guns . This can be explained by the different development of guns in the army and navy: guns installed on a ship could be built considerably larger than those that had to be transported off-road. In general, only load-divisible guns were used in the army. That is, guns whose individually divisible assemblies do not exceed a maximum weight of 2,000 kg in order to be able to move them in a horse-drawn train. Problems with the bedding also ensured that classic field guns did not take on the dimensions of sea guns.

The largest railway guns required a very long lead time before the first shot could be fired on site. In some cases, special tracks such as shooting bends had to be laid, or the gun had to be equipped with track claws , or special bedding such as cross bedding or Vögele turntables were set up before use . These measures primarily served to enlarge the lateral directional area of ​​the railway guns, which cannot be pointed to the side at will, and to absorb the immense recoil forces when firing.

The heyday of the railroad guns was the First World War with the relatively rigid front lines of trench warfare and material battles .

In the Second World War, these weapons were obsolete because their tasks could be performed more efficiently by the Luftwaffe; but since every major army had them at their disposal, they nevertheless played a certain role. Cruise missiles like the V1 and surface-to-surface missiles like the V2 also made railway artillery obsolete.

The projects P1500 "Monster" and P1000 , self-propelled versions with a weight of 1500 and 1000 tons respectively, were discontinued at the beginning of 1943 by the Minister of Armaments Albert Speer . 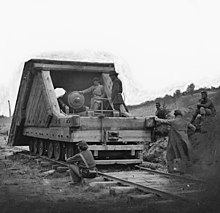 France promoted the development of mobile railway artillery early on and achieved a leading position in this field during the First World War. French guns often used a construction as a grinding carriage, with the recoil when firing was absorbed by the entire gun running back on the rails. An example of this was the Canon de 320 mm mle 1870/93 railway gun . Most of the guns in service in 1940 were captured by the Wehrmacht in June 1940 ( western campaign ) and continued to be used.

Based on the naval gun 305 mm L / 52 gun M1907 of the Imperial Russian Navy in 1938 at the State work Nikolaevsk a Railgun under the name TM-3-12 ( Russian транспортер морской типа 3 калибра 12 дюймов developed). A total of three pieces were built.

The USA had already had experience with railway guns during the Civil War , for example during the siege of Petersburg . Later they used French and British guns built under license; only after the First World War there were own designs (254 to 406 mm). Only the 203 mm M3 A2 cannon used in World War II was produced in large numbers.

The Imperial Japanese Army acquired in 1926 a gun barrel in caliber 24 cm from the French firm Schneider-Creusot and built the rest of the components for the Railgun in Japan together. In 1930 the Type 90 240 mm railway gun was handed over to the troops.

During the First World War, Italy initially relied on French railway guns. In 1917, the Ansaldo- built 381/40 gun was used, four of which were built. Four ship guns 381/40 Mod. 1914 were used for the construction, which were originally intended for the unfinished battleships of the Caracciolo class.