The development of the cannon began in 1906 in the Obukhov factory ( Обуховский завод , later Петроградский государственный орудийный оптический и сталелитейный завод "Большевик" ) in St. Petersburg . The forerunner, the 305 mm L / 40 (12 ″) M1895, also by Obuchow based on a design by Canet , had basically proven itself, but the performance of the cannons met the demands that had grown rapidly in the meantime, especially with regard to the range and penetration performance, nothing more.

Due to the poor quality of the steel - in order to reduce the gas pressure - the propellant charges used in the grenades had to be reduced in size. In order to still achieve the same ballistic values, the length of the gun barrel was increased by two calibers from the original 50 to 52 caliber. The first prototype was completed in 1907. The Russian naval command initially ordered twenty of the new cannons, which were to be delivered by the end of 1907, and 178 more for the following years. Of these, 126 could be delivered by 1917, another 42 cannons followed in 1917/18, and another 14 by 1921. In 1922, 29 cannons were in different stages of manufacture.

Insertion of pipes into a Poltava tower , 1914

The cannon consisted of a core tube (tube A), several overlapping casing tubes (tubes B to D) and the bottom piece. Another ring was used to connect to the cradle . A screw cap was used . A block with screw threads engages in the corresponding nut thread of the pipe wall, locks the pipe and closes it off at the rear. The exact caliber was 304.8 mm (12.0 "). The hydraulic tube brakes are located below the tube. The weapon was equipped with electric directional drives.

The triple towers for the battleships manufactured in the St. Petersburg metal factory were later given the designation MK-3-12 . A modified mount of the 305 mm L / 40 (12 ") M1895 was used . The twin ( MB-2-12 ) and triple turrets ( MB-3-12 ) were designed for coastal artillery for the first time Rotary rings of the towers instead of rollers, ball bearings were used, the ball diameter was 152 mm. The armor thickness of the front and side walls was 254 mm, the tower roof 100 mm and the rear wall - due to the counterbalance - 305 mm. The total weight of a tower was at 872 t. The towers for the ships of the line of the Black Sea Fleet differed from the other towers by reinforced armor. Both the towers for ship guns and for the coastal artillery were later modified to increase the aiming and firing speed as well as the leveling range Unlimited lateral straightening range, but limited in practice by the installation on board.

In coastal fortifications, the cannons were later also used in open stand-alone installation and on Krupp mounts.

From the cannon in 1938 at the Nikolayevsk State Works , a railway gun under the designation TM-3-12 ( Russian транспортер морской типа 3 калибра 12 дюймов ) was developed. A total of three pieces were built. The weapons of the Russian ship of the line Imperatriza Marija ( Russian Императрица Мария ) were used. The riveted mount is supported by two chassis with a total of 16 axles. Each chassis has eight axles. The elevation range was + 0 ° to + 40 °. As is usual with many railway guns, it could only be aimed to the side to a very limited extent by a few degrees. A shooting curve had to be used for side straightening .

Overall, the guns proved to be powerful and precise weapons.

The cannons were used in triplet turrets as the main armament on the following ships:

Noteworthy is the fate of the cannons of the Emperor Alexander III. On April 29, 1917, the ship was taken over by the Soviets and renamed Volja . In May 1918 she was captured by German troops in Sevastopol and brought to Izmir . On October 17, 1919, she came under Belarusian control and was renamed General Alexejew . After the defeat of the White Guard troops, she was interned in Bizerta . France refused to return it to the Soviet Union in 1924 and began demolishing in Bizerta, the cannons were used in the coastal fortifications there. At the beginning of the Second World War, France offered twelve guns to Finland and Norway. Two transport ships with a total of eight cannons reached Finland, the cannons were used in the former Russian coastal fortifications there and for the captured Soviet railway artillery. However, the Norwegian four-gun steamer Nina was seized by German warships in 1940. The captured guns were used on Guernsey until the end of the war . The guns handed over to Finland fell back into Soviet hands after the end of the Second World War.

The sea ​​fortress of Emperor Peter the Great ( Морская Крепость имени Императора Петра Великого ) was built from 1912 in the aftermath of the sea battle of Tsushima, which Russia lost. The task of the fortress was to protect the entrances to Saint Petersburg. It consisted of a total of four fortification lines, the foremost of which stretches from the Hanko peninsula over the Åland islands to Hiiumaa . Various large-caliber guns were used in the spacious position. The 305-mm-L / 52 cannon M1907 was among other things in the positions on Aegna (two pieces) and Naissaar (four pieces). The construction of the fortress was delayed by the First World War. When Russia left the war in 1917, the fortress was not yet completed. After Finland's independence and the secession of Estonia in 1918, parts of the fortress and thus also the weapons there were in Finnish and Estonian possession.

The fortress Porkkala had to be forcibly leased to the Soviet Union by Finland in 1944 in the wake of the lost Continuation War . After the fortress was abandoned in 1956, the 305 mm L / 52 cannons M1907 located there were destroyed.

In the fortress Sveaborg ( Russian Крепость Свеаборг ) a total of four batteries of the land front were to be equipped with the 305 mm L / 52 cannon M1907 . Because of the First World War, however, the work was not completed.

The weapon was used in the tank turret batteries ( Russian Бронебашенная батарея ) BB-30 and BB-35 in Sevastopol. The construction of the fortifications was already planned in pre-revolutionary Russia, but in 1914 only the earthworks for the gun wells were carried out and some underground passages were laid, after which the construction site was conserved. The construction of the guns had already been ordered in 1910, the gun mounts in 1913. Except in the larger powder chamber, the design of the cannons did not differ from the ship's guns. After the delays caused by the war, construction of the BB-30 began again in 1932 . The sister battery BB-35 was built from 1928 to 1935. Two twin towers of the type MB-2-12 (МБ-2-12) were installed in each of the two batteries . During the Second World War, both batteries were destroyed by massive use of heavy artillery.

In 1949, it was decided to rebuild the BB-30 battery ( coastal battery Maxim Gorki I ) as part of the reconstruction of the Sevastopol naval base . However, this time triple towers were used in place of the original twin towers. Reconstruction began in 1952. The towers were taken from the Mikhail Frunze , the pipes from various ships. Two of the guns in Tower 1 came from the Marat , one from the Krasnaya Gorka fortress to the west of St. Petersburg ( Russian Красная горка ). The pipes of tower 2 came from a total of three ships: from the Volkhov ( Волхов ), the Oktjabrskaja Rewoljuzija ( Октябрьская революция ) and the Swobodnaja Rossija ( Свободная Россия ). However, technical progress had already overtaken the battery, and the last sharp shot was fired in 1958. Still, the battery remained operational until at least 1993. The BB-35 battery (Maxim Gorki II coastal battery) was not rebuilt.

The two remaining towers of the ship of the line of the Mikhail Frunze were used in a coastal fortification on the island of Russky near Vladivostok .

Cannons captured by German troops were used in the Mirus battery on the island of Guernsey . These are the cannons of Emperor Alexander III destined for Norway . The battery was originally named Nina and was later named after the sea captain Rolf Mirus, who died in November 1941 near Guernsey. The guns were converted for the usual German 30.5 cm shells and propellant charges. With the Spr.gr. L / 3.6 Bdz u. Kz (mhb) a range of 51 km was achieved, with the Psgr. L / 4.9 (mhb) a range of 39 km. 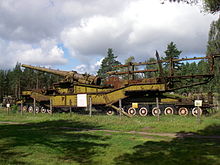 The guns were used in the Russo-Finnish War 1939-1940. From June 1941 they were used in the defense of the Soviet naval base Hanko in Finland . Made unusable by Soviet sailors during the evacuation of the base, they were restored by Finnish specialists. The gun barrels of the former Russian ship of the line Imperator Alexander III. which Finland had acquired from France in 1939. After the end of the Second World War, they returned to Soviet possession, were kept ready for use until 1991 and finally scrapped in 1999.