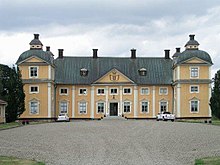 Gripenberg Castle (Swedish: Gripenbergs slott ) is located near Tranås in the historic Småland province . It is the largest wooden palace in Sweden and was built by Carl Gustav Wrangel as a hunting lodge in 1663 .

Wrangel probably chose the name to cherish the memory of his mother Margareta Grip . The architect is unknown, but it is assumed that it is Nicodemus Tessin the Elder . A contemporary wooden model of the castle, which was probably used for planning and design, has also been preserved. This model is now at Skokloster Castle . Already at the end of the 17th century Gripenberg Castle was bought by the Kommerzienrat Samuel von Söderling. It is still owned by his heirs and is not open to the public. The building is a listed building .