The Schnürboden is a false ceiling in the theater above the stage , which is also known as a rope floor . Often there is another level above the lace floor, the so-called roller floor, which is intended to ensure easier access to the lace floor. 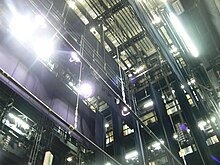 Modern Schnürboden in the Bielefeld Theater

To lift parts of the stage set , trains run from the stage wall over the lacing floor and can be lowered from the stage ceiling. So that you are not tied to a certain point on the stage, many moves are evenly distributed over the stage. All these “cords” run on the cord floor from the wall over rollers to the hole in the stage ceiling through which they are lowered. So that the cords can be operated by one person, they are attached to the side wall on slides on which weights can be placed to compensate for the mass of the stage decoration. These manually operated pulls with counterweights are called manual counter pulls .

In modern theaters, the trains are usually operated directly by computer- controlled electrical or hydraulic cable winches attached to the rope floor . Hydraulic cylinders are also used for this . The impression of a "string bottom" is no longer to be found there.

The lacing floor is operated by the lacing master and his employees, who are also referred to as chief machinists at some theaters, but this is not intended to express a higher rank, but only describes the position of the working environment. In the past, former sailors who had a lot of experience with ropes, ropes and knots were often used in the Schnürboden.