In 1900, rapid fire guns were known as guns that could fire several shots per minute.

Up until the end of the 19th century, the guns compensated for the recoil that occurred when the gun was fired by rolling back with the mount or, in the case of light guns, jumping back. After the shot, the barrel had to be wiped out, loaded with projectile and propellant, the breech closed and the gun pointed at the target again. That is why one spoke of recoil guns. All attempts to limit the return yielded unsatisfactory results.

In 1888, Konrad Haußner , an engineer at Krupp , proposed a device in a memorandum that allowed the gun barrel to run back in a guide independently of the mount, whereby a combined system of hydraulic cylinder and spring initially only reduced the recoil (short barrel return ) and later completely caught (long pipe return). Other systems worked with air picks. Haußner's principle was rejected, however, whereupon he left Krupp and joined the Magdeburg Grusonwerk AG Buckau in 1891 , where some prototypes were built until 1893. After the takeover of the Gruson factory by Friedrich Krupp AG in the same year, the project was discontinued. 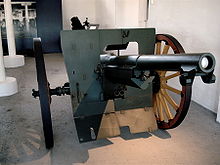 The French 75mm field cannon, Model 1897, was the first rapid-fire gun to be introduced to the land forces

Haußner then contacted Heinrich Ehrhardt in 1895 , in whose company Rheinmetall he developed the first recoil gun. This was again rejected by the Prussian Artillery Examination Commission - the German Reich introduced its new field cannon 96 as a rigid gun. Two years later (1897) France introduced the 75mm field cannon designed by some artillery officers . Since the mount was completely still when firing, up to 15 rounds per minute could now be fired without having to readjust the gun - the rapid-fire gun was born, as the other reasons for the slow rate of fire mentioned above were also eliminated:

All military powers introduced recoil guns within a few years. The German Reich had to convert all of its almost new field cannons into field cannons 96 of a new type and equip them with new mounts. The rapid fire gun became the dominant weapon of the First World War .

A semi-automatic gun is usually a rapid-fire gun with a wedge lock that ejects the case after being fired and is ready for loading again with the breech open.

The development of rapid-fire guns also revolutionized the armament of warships around 1900. In a ship, the rate of fire was just as important as the number of guns, which was limited by the size of the ships. When ships approached each other, it was important to generate as large a hail of bullets as possible when reaching the operational range.

First, the middle artillery of the ships (up to 17 cm caliber ) was replaced by rapid fire guns. With the appearance of the dreadnoughts at the beginning of the 20th century, the heavy guns were also designed according to the rapid fire principle.

In the German Navy in particular, these rapid-fire guns - which were exclusively cannons on warships - were expressly referred to as Schnelladekanonen (abbreviation: SK).