A self-righting device is a watercraft that, thanks to its construction, always finds its way back to its normal swimming position - deck up, hull down - even after capsizing . In the case of heeling (inclined position), a righting moment is generated due to the construction.

The righting moment is mostly achieved by weights or water tanks inside the ship or by the weight of the keel or the sword . A distinction can be made between dimensionally stable and weight-stable construction methods for all types of ship. Dimensional stability means that a ship does not heel a little below the waterline due to its wide hull . If a dimensionally stable ship capsizes , it remains in this position - that is, the keel up. A weight-stable ship is built slimmer (nautical: slim design), which means: the width is a maximum of a quarter of the ship's length. If such a ship capsizes, it will straighten up again in the normal swimming position at the latest with the next wave. This is done by the heavy ballast built into the keel area . 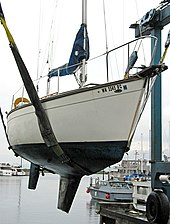 Keelboat with a view of the fin keel

The capabilities of a self-righting ship have been proven in practice in two accidents.

In both cases, the upper control positions of the rescue cruiser were converted into closed ones.

Seagoing monohull sailboats are built as keel boats and are therefore also self- righting .