Sergei Legat (left) and Stanislava Belinskaya in the Nutcracker (1892) 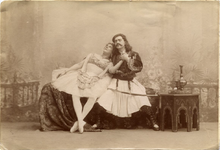 Sergei Legat was a brother of the ballet dancer Nikolai Legat (1869–1937), her father Gustav Legat was a ballet dancer and ballet master. Legat attended the Imperial Ballet School and studied with Pawel Gerdt , Christian Johansson , Lev Ivanov and his brother. In 1894 he received an engagement at the Mariinsky Ballet and in 1903 he developed into a solo dancer.

Legat later also became a ballet teacher, and Vaslav Nijinsky was among his students .

Legat created roles such as Merkur in Le Réveil de Flore (Petipa), Arthur in Barbe-Bleue (Petipa) and Jean de Brienne in Raimonda . At the premiere of Tchaikovsky's ballet The Nutcracker in 1892, he created the double role of the Nutcracker Prince. New ballet steps were developed for Legat.

In 1901 Legat married the much older dancer Marie Petipa (1857–1930), a daughter of Maria Sergejewna Surowschtschikowa and Marius Petipa . At the beginning of the Russian Revolution of 1905 , there were clashes at the theater when Marius Petipa was fired. Legat committed the conditions under the pressure of suicide . He was buried in the Smolensk cemetery .