Shareaza is a file sharing - Client for Windows systems, the G2 , Gnutella , eDonkey2000 , BitTorrent and DC ++ supports. It can also be integrated into web browsers as a download manager . Shareaza is available in around 30 languages, including German. Version 2.7.8.0 of December 14, 2014 was offered in both the SSE2 -optimized and the "normally" compiled version.

Since June 1, 2004, when version 2.0 of Shareaza was released, the source code has been available to everyone under the terms of the free GNU General Public License .

The author of Shareazas is Michael Stokes , who also integrated the Gnutella2 network he developed into the software. In mid-2002 he published the first version of a gnutella client, which he named “Shareaza”. According to Stokes, the stated goal of developing his client from the start was to support and develop features that other clients did not have. For example, the development of "swarming", i. H. the simultaneous download of file parts from several sources, a feature that is now supported by all major file sharing programs, is largely due to the work of Michael Stokes.

Over the next two years, Stokes added support for eDonkey2000, BitTorrent, and a completely redesigned Gnutella-based protocol he named Gnutella2 to the program. This led to a split in the file sharing community into a gnutella and a Gnutella2 / Shareaza site, as supporters of the original gnutella protocol accused Stokes that the name of his new protocol implied an update of the "original" or a superiority over it. The conflict intensified when Stokes began to refer to the "original" gnutella in Shareaza as "Gnutella1".

On June 1, 2004, Michael Stokes published the source code of the program under the GNU General Public License on SourceForge.net and, together with programs such as LimeWire and Gnucleus , started a movement towards the opening of the source code for file sharing programs, which continued in the course of the Time joined many programs. Today all important and well-known representatives of these network programs are open source.

With the departure of the main Shareaza developer from the file sharing community, the protocol name conflict and the division between the developer and user communities gradually subsided, even if some of the other gnutella developers have reservations about Shareaza to this day. For this reason, Gnutella2 is now often referred to simply as G2 after its abbreviation. This change is also reflected in Shareaza.

Since December 2007 the domain shareaza.com no longer belongs to the previous developers. The new owners now offer a different client there, which is incorrectly called Shareaza, but is based on a modified version of BearShare / iMesh . This is partially classified as malware / spyware , which is why security services, such as McAfee SiteAdvisor , warn against the website. Versions prior to v2.3.1.0 sometimes ask for updates from shareaza.com and ask the user to install the fake client. This behavior no longer occurs in versions from v2.3.1.0. The Shareaza project homepage was then moved to SourceForge.net .

Shareaza under Debian GNU / Linux with GNOME under Wine

Shareaza is an application for Windows. It also works on Linux with the help of Wine .

However, several independent projects are working on porting the functionality of Shareaza to UNIX-based systems. The most important of these are Sharelin , which mainly focuses on the functions of the Gnutella2 network, and Quazaa , which intends to implement almost all of Shareaza's functions with the help of the Qt library.

The Gnutella2 network offers, among other things, support for a large number of metadata , such as file ratings or file properties. Efficient searches for metadata are also possible. During the search, real-time statistics enable an overview of the progress of the search (hubs searched, etc.). Furthermore, in the Gnutella2 network - in contrast to gnutella - it is possible to search the entire network and therefore (in theory) to find every single file that matches the search query in the network. Larger files can also be exchanged sensibly ( swarming , partial file sharing, efficient localization of sources). Each user can create a user profile with a nickname and other information, such as the geographic location. Chat with other network users is also possible.

In addition, the gnutella, eDonkey2000 and BitTorrent networks are supported (but not the KAD based on Kademlia ). File parts can even be obtained from all networks at the same time in order to download a file more quickly. Simultaneous uploading to all networks is also possible. Torrent uploads are preferred to all other networks, which cannot be changed, but can be limited in the latest version of the software.

Also HTTP - and FTP -Downloads dominated Shareaza. In this way, the user can use all of the networks and protocols mentioned in Shareaza and download and upload files from different networks at the same time. Shareaza can even be used as a download manager , so that it takes over all Internet downloads with the help of an Internet Explorer plug-in ( BHO ). Support for other browsers, such as Firefox, is possible via third-party plugins.

For the secure identification of files, Shareaza supports both eD2K and magnet links , which - similar to torrents - can be provided by link sites or communities. Since these magnet links contain several different hash checksums, which uniquely identify a file in the network, the quality of the downloaded files can be ensured. In addition, these links, just like BitTorrent files, can be created from the File Manager context menu Shareazas. 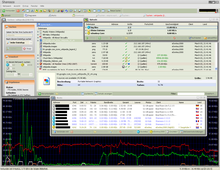 Image of Shareaza in "power mode", combined with a window view and several activated skins. A search window, a bandwidth graphic, the upload window (top right) and the connection monitor showing four gnutella and three Gnutella2 connections as well as an eDonkey server connection are visible.

In addition to the usual file sharing functions, Shareaza offers a download file preview, an integrated media player and a feature-rich file management library. From version 2.4.0.0 an IRC client is also integrated in the program.

For experts, the program has a so-called "power mode" which offers a variety of advanced functions, such as editing downloads and using the scheduler, as well as access to advanced program settings. It also allows the functionality of the program to be monitored and the security manager to be accessed via various windows.

Furthermore, the way the program is displayed can be changed to a large extent: three view modes can be selected (a simplified, a tab and a window view), and the appearance can be changed with so-called "skins" (file extension .sks; based on XML) modify the user interface almost at will.

Use by anti-P2P companies

A modified version of Shareaza is also used by companies to detect copyright violations , to automatically search file sharing sites for works protected by copyright and to log the IP addresses of the providers for legal prosecution. With the program, these companies also place so-called fakes or bait in P2P file sharing networks. Fakes hardly spread, however, as the files in question can be quickly identified by integrating metadata. This use of Shareaza can be traced back to the publication of the source code .