This article covers a topic from mythology. For other meanings of the term SIF, see SIF (disambiguation). 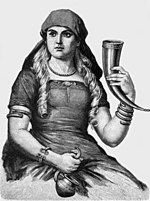 Sif - Illustration in a Swedish Edda translation from 1893

Sif , Old Norse for "relatives, Gesippin", is the wife of Thor, the god of thunder , in Norse mythology . With him she fathered a daughter named Thrud ("strength"). She also has a son, the fast archer Ullr , whom she brought into the marriage. When Loki cunningly shaved off her beautiful, shiny, golden hair, Thor forced him to have artful dwarfs make a new gold hair ornament for her that could grow like hair.

In older research, the golden hair was interpreted as a symbol of the ripe field of ears, whose golden jewelry is cut off in the glow of late summer, but then rewoven by invisible earth forces. But Sif seems to have had no other function in Norse mythology than to be Thor's wife, as her name suggests.