Symbols of the United Irishmen: the uncrowned harp and the Jacobin cap 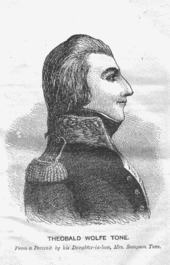 The Society of United Irishmen ( Irish Cumann na nÉireannach Aontaithe , German Society of the United Irish ) was founded towards the end of the 18th century as a reform society and developed into a movement for the creation of an Irish republic.

The trigger for the movement was the dissatisfaction of the middle class in view of the stagnating political situation at that time. In Dublin , although met an Irish Parliament, but it was anything but a body hit the decisions referred to in the country. In any case, only Protestants enjoyed the right to vote, and among them mostly only a few members of wealthy landowning dynasties. Great Britain was able to make this influential elite loyal through appropriate patronage, so that the Irish Parliament was de facto completely subordinate to the British and degenerated into London's instrument of power. As a result of the Penal Laws , which remained in force, Catholics were not allowed to vote or hold political office. But initially it was mostly Presbyterian Protestants from the rising urban middle class who, under the influence of the writings of Thomas Paine and the French Revolution , strove for more political independence from Great Britain. To a lesser extent, however, they also advocated the complete abolition of discriminatory legislation that has so far denied Catholics equal rights. The statement by Theobald Wolfe Tone , who pleaded for an alliance of all Irish, regardless of their denomination and status , was particularly trend- setting. Under this impression, the first meeting of the Society of United Irishmen took place on October 18, 1791 in Belfast . It saw itself as a public forum for discussion about the future of the Irish nation. Founding members also included members of the Peerage of Ireland such as Archibald Hamilton Rowan .

The initially legal group quickly found a following in Dublin and sought contact with broader sections of the population. The movement was interested in the French revolutionary ideas, but not openly open to them. When France declared war on Great Britain in 1793, London classified the United Irishmen as subversive and banned them. Its members and sympathizers then continued their work underground and sought closer contact with France. The participants were aware of the danger of later exchanging British dominance for French dominance, but saw no other way out given the worsening situation in Ireland. The needy Catholic population joined in growing numbers militant secret societies like the Defenders , who came together for spontaneous and unorganized actions against acute grievances. British troops and locally recruited militias were used to quell these localized revolts and to disarm any potential rebels. To the leaders of the United Irishmen, the time seemed ripe for a nationwide uprising, if French troops gave a signal to the dispersed insurgents by landing in Ireland. Wolfe Tone was already in France and in fact found the support he had hoped for for his cause. In 1796 a French fleet with 15,000 men under the command of General Lazare Hoche set out, but shipwrecks, heavy seas and adverse winds prevented the troops from landing, whereupon the ships returned to Brest without having achieved anything. Great Britain was aware of how happily it had escaped an invasion of its insecure western flank and stepped up its attack on all Irish separatists. In particular, it took advantage of the sectarian tensions in Ulster , in which it also relied on radical elements of the Protestant Orange Order in order to put an end to the smoldering turmoil of the Catholic majority by all means.

But even if the French landing had succeeded, it would hardly have led to an uprising across Ireland. The United Irishmen's optimism was exaggerated about the revolutionary sentiment of Catholics. Many of them were loyal to the Crown and also served in local militias that cooperated with the British military. In order to mobilize Catholics for their cause, the Irishmen presented themselves as a counter-movement to the Orangemen, emphasizing their violent excesses in the north of Ireland. As a result, the number of supporters grew, but they were hardly integrated into the organization and were not under any central command. Overall, the leadership was insufficiently informed about the situation in the provinces and had only patchy controls. The British authorities, on the other hand, had infiltrated the United Irishmen with informants and were well informed of what was happening. Before the Irish Rebellion of 1798 broke out, they arrested the leading figures and stripped the rebellion of coordination. The rebels no longer wanted to wait for the long-promised French help and struck off. This resulted in murders and looting of wealthy Protestants by the rebellious rural population. It was precisely this sectarian hatred that was not wanted to stir up when the fear of the Orangemen was invoked. But there was no longer any question of an alliance of denominations.

When considering the Protestant part of the population, the rebellion was often reduced to the excesses of violence directed against its members. However, this ignores the fact that the number of victims to Catholics was many times higher. Many of them were killed on mere suspicion of rebellion and entire towns burned to the ground. In contrast, later eras Irish nationalists viewed the rebellion of the United Irishmen as a revolt of the Irish people brutally suppressed by British forces. This view ignores the fact that Irish Catholics were also involved to a large extent in the crackdown.